It is natural on New Year’s Eve to reassess, evaluate, and resolve to change certain things. It’s less conventional to do it on the 10th of May, but that’s what happened in 2008 for me, as pictured above. Back in May of 08 my journal pages featured the date more prominently. Later that same year, as seen below, the date became a footnote to my signature. Judging from the message of the page, it must’ve been a bleak November… 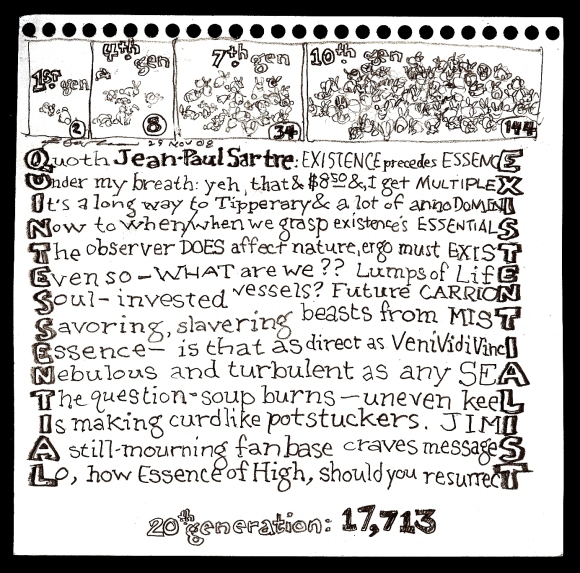 But 2012 has been far from bleak. I leave it in better health than I entered it, and with love and light abounding, and 2013 promises yet more transcendence. Reader, may your 2013 be your best year yet.

Dorothy Parker thought “Excuse My Dust” would be a fine epitaph. Had her spirit persisted after her death, and hung around Earth to see what happened to her Earthly remains, I think she would have howled to see that her Earthly remains somehow ended up in a filing cabinet for seventeen years.

She had an incomparable wit. I am sorry to have never met her. I pay my respects by paging her with a sonnet.

Way back in ’09, and early ’09 at that, I took a tangential look at nudity. The effort, with three epigrammatical quotations and two acrostics, looked like this:

This week I dug it out and had a go at revamping it. I had learned a year ago, reading Art Spiegelman’s awe-inspiring MegaMaus, that his Pulitzer-Prize-winning Maus was thirteen years in the making, and that he’d painstakingly done draft after draft of comic-book pages, panel studies, and layouts. Now I would see what reflection and rework would do for one of my own.

This study includes the epigrams but not the acrostics. I added a quotation, concentrated more on the calligraphy, experimented with more angled text presentations, and drew a different imagined nude cat lady. (I felt the original looked too YOUNG-old.) Then I did a text study of my acrostics:

Note the lines “Magistrate or Auntie Em/A Joy, a Challenge, a Dilemma.” The scansion sort of jumps the rails to maintain acrostic integrity; were there no acrostic, the break would yield “Magistrate or Auntie Em a/Joy, a Challenge, a Dilemma.” I especially liked the flat-breaking plane of the NAKED NAKED NAKED triple acrostic. Now I was ready to integrate the studies into yet another study.

This result took about three hours, and could have taken another three to unmuddy and finesse the image, had I the time. I do not, so I will save the FINAL final image for another time. But there’s a valuable creative-process lesson in reworking an original. I will be doing a lot more reworking, of this and many others, in 2013 and beyond. 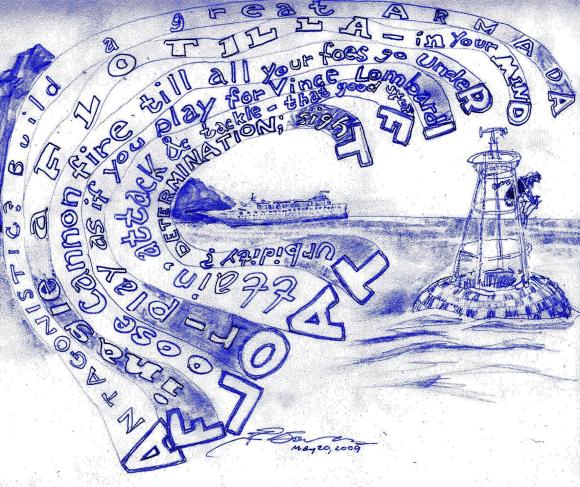 In the foreground in someone clinging to a buoy. In the midground is a cruise ship. In the background is a section of rocky coastline. Atop all are words that eddy. With all, the priority is staying afloat.

The underwhelming answer: It is a drawing I made with graphite sticks while trying to have as blank a mind as managed. But it is also one way to illustrate “The Love Song of J. Alfred Prufrock” by T. S. Eliot. Eliot’s poem also refers to an overwhelming question–and then then next line admonishes, “Oh, do not ask, ‘What is it?'”

So one way to answer–or ask–an Overwhelming Question is to make something wordless, that gets people wondering how or why it came to be. Since your mission is accomplished with the asking, you need not provide an equally overwhelming answer.

Here is the evolution of a journal page, spoon-fed: 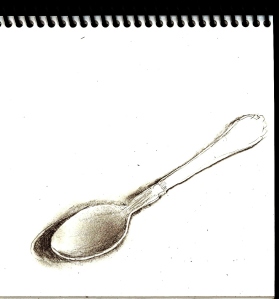 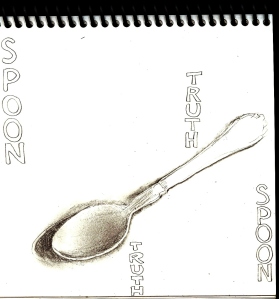 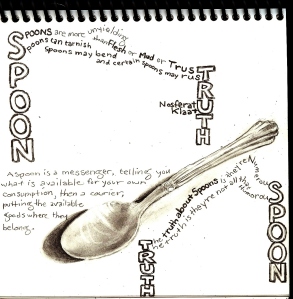 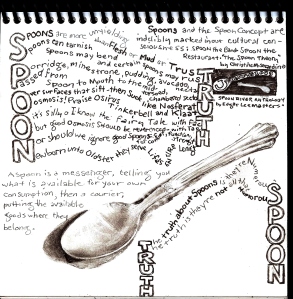 But sometimes we go too far. In this case, the finished spoon, unadorned, seems to speak for itself.

The title of this post is “Spoon Render Anthology.” It refers obliquely to the classic SPOON RIVER ANTHOLOGY by Edgar Lee Masters, which is a poem cycle of capsule biographies told by the permanent residents of a graveyard. It is, pardon the pun, haunting, to say the least, and brilliant; and if only one reader of these message-in-a-bottle words goes into the ethers and finds and reads it, this blog post will have succeeded beyond its dream of avarice…

It’s Christmas morning, 5:08 AM local time as I type. The houseguests and the significant other sleep soundly, I hope. Soon the year will end.

Happy Holiday, whatever your holiday may be!

If you have never tried your hand at acrostic poetry, here’s your chance. This triple acrostic has barely been started. but it is revelatory of one of the secrets to acrostic success: start with the end words first. Note also that A, L and Y are easy end-letters for rhymes. (J, Q and U are less so, unless you want to repeat a limited set of words in your poetry.)

In this case the first four end words are Belladonna, pneumonia, begonia, hineyana. That’s an a b b a rhyme scheme, which may or may not lend itself to a Petrarchan sonnet.

I frankly don’t recall whether I ever finished this one. Its color, and the winglike ears of the mournful-eyed pup, suggests the winter holidays, so it grabbed my eye when I was looking through my files.

A long time ago I did layer upon layer of words, erasing most of the layer before I went on to the next one. Then I drew an old-fashioned skeleton key over all, and it looked as if it were suspended in a cage of words. Later, but still long ago, I did this, and it is similar, except the visual is entirely calligraphic.

Once upon a time I was making a thin-walled bowl form on my potter’s wheel when I got a little too thin with the wall and it collapsed inward. It was my great luck that the collapsed shape it made reminded me of a bird’s body, and got me onto sculpting odd birds of no particular species–some have reminded folks of chickens, others of pigeons, and master potter Jon Higuchi once likened one to a turkey buzzard, but in their struggle to become alive and unique they are at best transcendent of genetics.

I gave this one to my girlfriend Denise, who enjoys its primitivity. 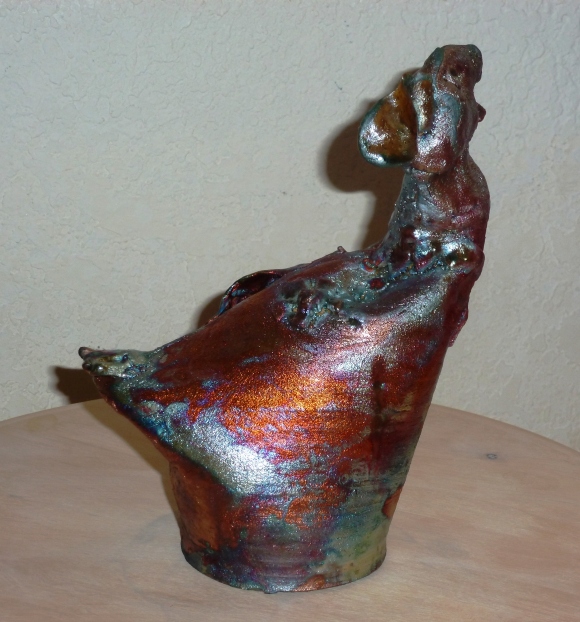 This one is the first raku piece I made in Sedona, where I now live, while I was taking my first Sedona Arts Center ceramics class. The class’s instructor, Dennis Ott, accidentally broke off half of half the beak. He was apologetic, but to me it was like the final stage of the classic La mariée mise à nu par ses célibataires, même (“The Bride Stripped Bare By Her Bachelors, Even”) by Marcel Duchamp: legend has it that the glass of the composition was shattered via the clumsiness of offloaders; though he’d worked eight years on it, Duchamp was not shattered by the shattering, but delighted; “Now it’s perfect!” he is said to have exclaimed. And when the estimable Mr. Ott broke one half of half my bird’s beak, I could not but break the other half of the other. The bird isn’t perfect, but he’s better: now he looks like he’s laughing with a Bert Lahr mouth. (Unfortunately, the bird’s head is turned away in this picture, so you can’t tell from this. Perhaps you will come visit.)

Here is a pit-fired bird, which the blog software has turned 90 degrees, I know not why. Pit firing enables a piece to reveal the fiery fury of the process that made it; and this bird is a tortured soul, and so I am glad to show that it has been through the fire and yet still strains for Heaven (or, at this angle, for the other side of the room). Note the triangular cutout. More on that in a bit.

Well, son of a gun if this one wasn’t turned sideways too. Must be accommodative of the columnar nature of the blog. Live and learn! –Anyway, this Clown Bird, jester’s hat and all, also has a cutout. I often do that with my pottery and sculpture. Long ago master potter Hallmar Hjalmarson asked me why. “To give them an interior,” I told him; and he stopped calling me “young man” and started calling me “holy man.” (He is a treasure.) But this one’s cutout went awry. It was supposed to be an omega symbol. The interior negative space of the symbol broke off, and I turned the former symbol into a primitive window. Alas; I wish it were an Omega.