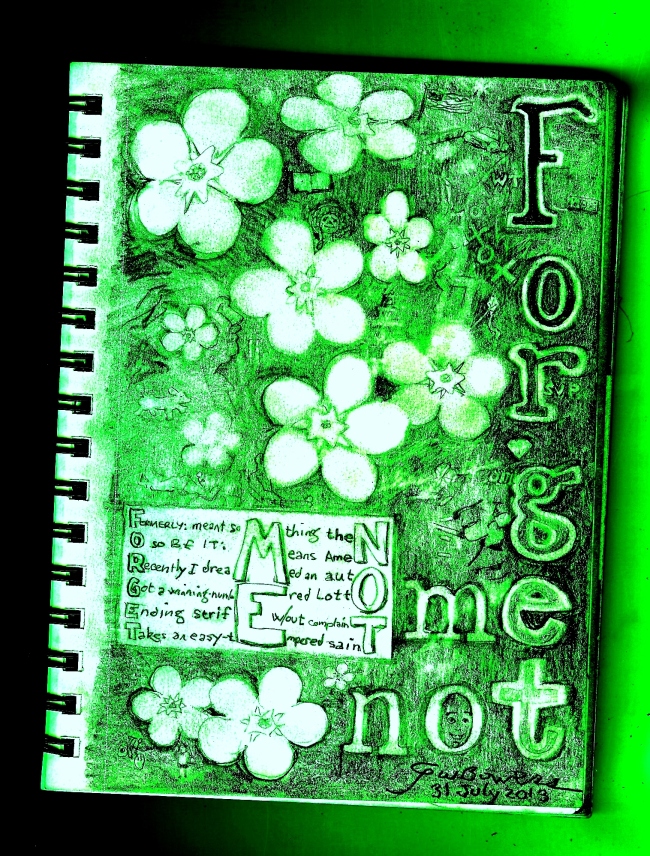 Here I imagine the eponymous flowers with a mist of free-floating memories, hard to see but there.

Words to the triple acrostic:

FORMERLY: meant something then
O so BE IT: means Amen
Recently I dreamed an auto
Got a winning numbered Lotto
Ending strife without complaint
Takes an easy-tempered saint 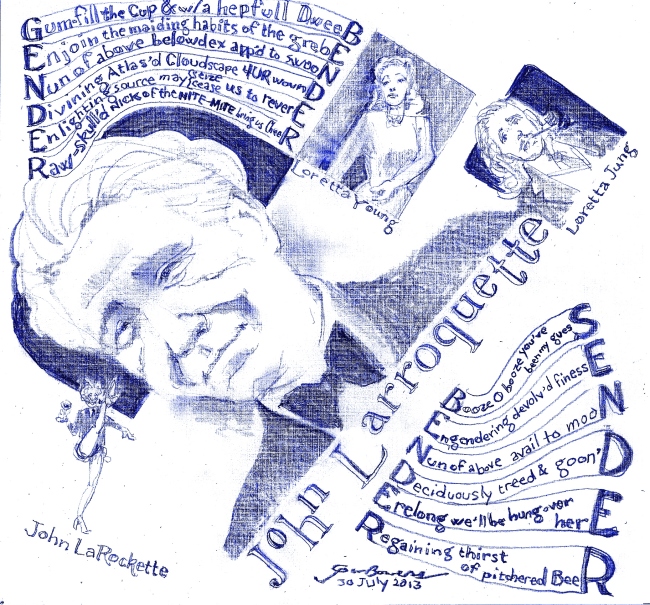 So there were Loretta Young and John Larroquette, minding their own business, when along I come and transvestize them, because I noticed that slight changes to their last names would do the trick. I hope they and/or their spirits mind less about that than I did when it was done to me. (A female so-called friend of mine put my head on a “princess” body as an action figure in a video game. I have forgiven her, but there was a rift. Guess I’m not, or was not, all that secure in my masculinity…?)

Gonna take dancing lessons, do the jitterbug rag
Ain’t no shortcuts, gonna dress in drag
Only a fool in here would think he’s got anything to prove…

And of course there are J. Edgar Hoover and Muammar Gaddafi and David Bowie and Marlene Dietrich and heart-stopping mustachioed Gwyneth Paltrow and certain of my widening circle of friends who hail from San Diego…

As for Alcoholism, John Larroquette is more than 30 years sober, and the closest Loretta Young came to it was falling for Spencer Tracy. But I tip my tipsy-hat to my grandfather with the line “Booze O Booze you’ve been my guess” because he was found of declaiming

Here are, with some annotation, the two sets of words to the two double acrostics:

Line One is a riff on Omar Khayyam’s “Come, fill the Cup, and in the light of Spring…” Line Four is an oblique hommage to the movie version of Cloud Atlas and its gender-reassigned co-creator Lana (formerly Larry) Wachowski. Line Six has, I trust, the worst-yet pun based on Raskolnikov.

Line Five has a quantum split in it, depending on whether you choose “Seize” or “Cease.” This is what comes of watching dozens of episodes of FRINGE.

Note the similarity of Line Three to Line Three of “Gender Bender.” Like the rug in THE BIG LEBOWSKI, it sort of “ties the room together.”

“Moon” in Line Three, and “Hung over” in Line Five, are meaning-optional. 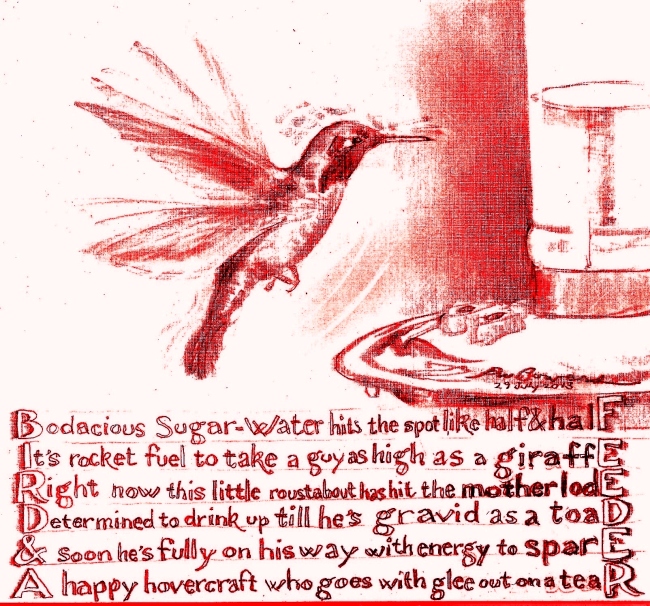 Hummingbirds get my vote for most amazement per pound. They’re swoopy and freeze-framey and often iridescent, and I love it when one shows up.

Here are the words to the iambic-septametric double acrostic: 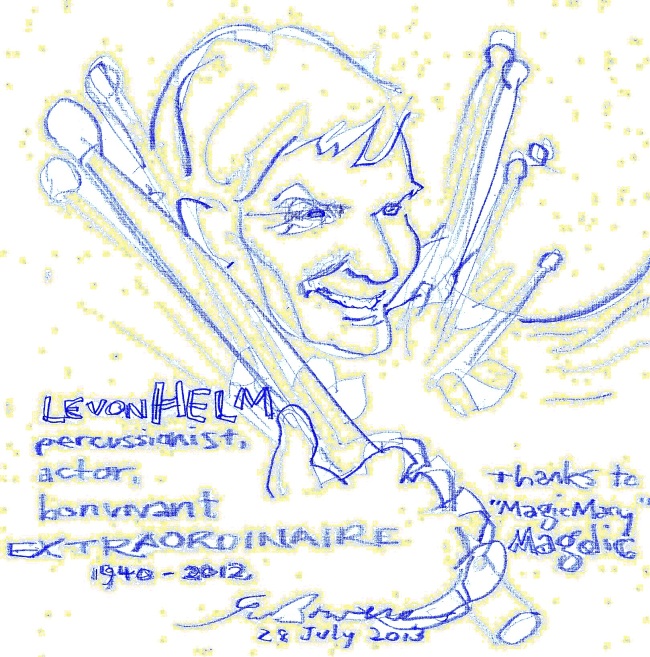 This was done by way of thanks to a friend who’d sent me a card featuring Levon in his bearded Salad Days. I have posted it on Facebook, and on the post I mentioned I might base a journal page on Levon some day. If I do, the double acrostic will be LEVON HELM’D.

Here’s a webcam “selfie” of me and the card: 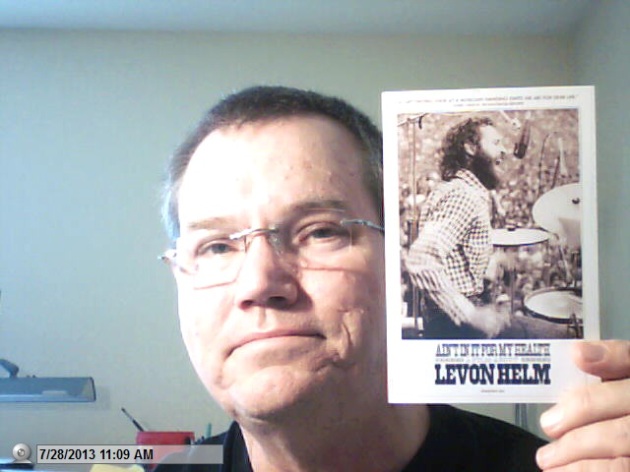 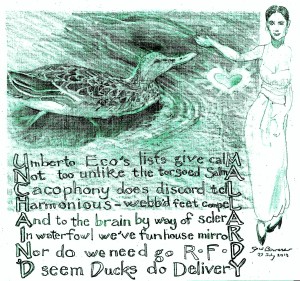 This post’s title was to have been “Post #222,” for this is my 222nd post, and I have a thing for certain numbers. When I’m on a treadmill I call eleven minutes and eleven seconds “getting my ones;” 22:22 is “getting my twos;” and so on. I used to get my fives. Then I got old and deconditioned.

But the title is “Unchain’d Mallardy” for two reasons. Reason one: I consider this one of my worst puns of all time, and I take perverse pride in that. Reason two: the song “Unchained Melody,” which I love to hear and wish I could sing, came to be in about as random a way as this page did.

This morning the first thing I did to my blank page was to rub a pencil’s edge over it while it lay atop the drawing table I’ve owned and used for more than 40 years. Here is what I got: 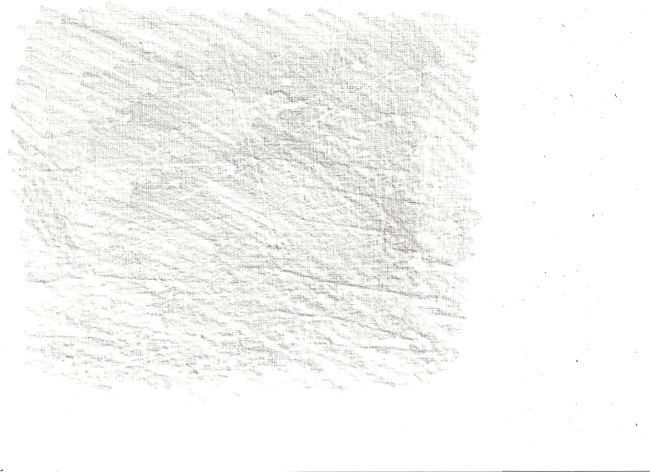 The scratches, gouges and dings from often-ill-advised use of my table gave an unevenness to the graphite rubbing, as I hoped it would. Straining to see something real in the randomness, I suddenly perceived a duck on the surface of a body of water.

Here is a progression of my drawing’s stages from that point on: 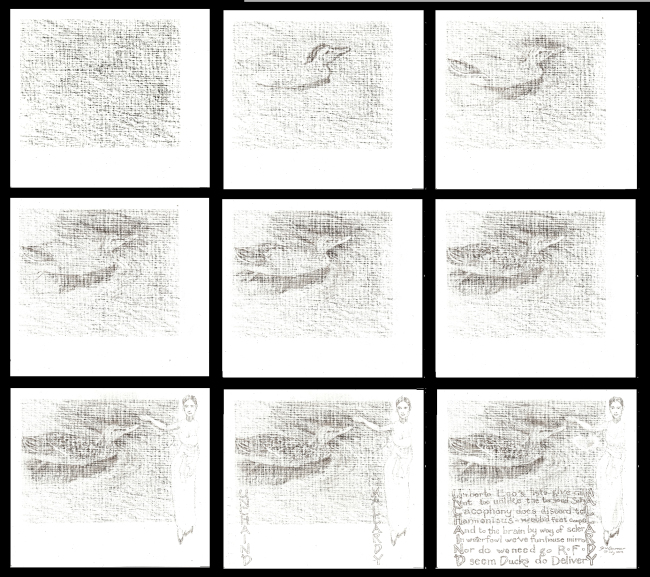 The gorgeous and talented Salma H didn’t enter the equation till I’d written the poem. I had left room for her beforehand, though–I knew another element would demand existence.

Here are the words: 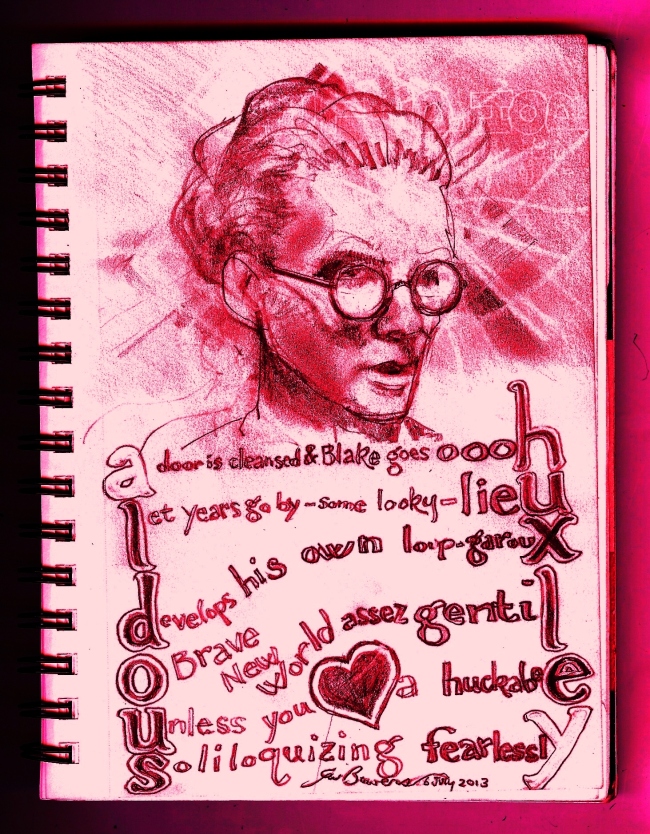 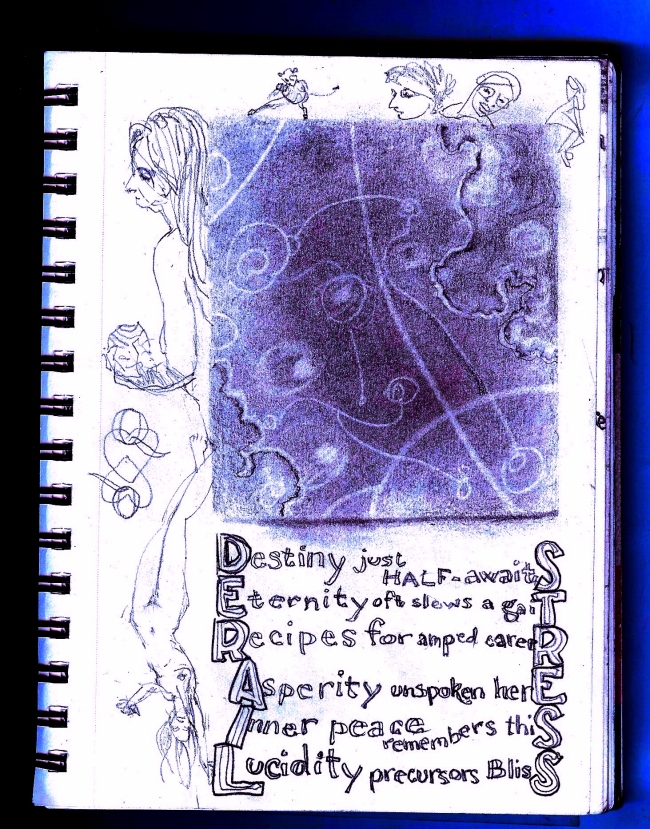 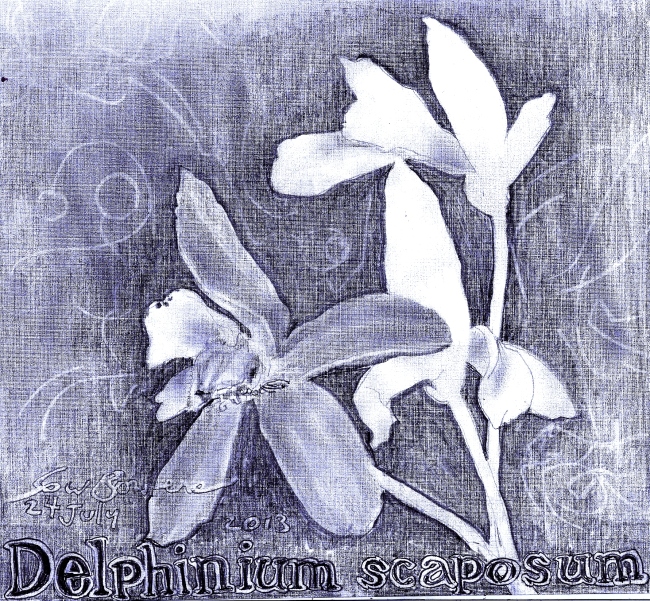 –“Flower in the Crannied Wall” by Alfred, Lord Tennyson

–from “The Dormouse and the Doctor” by A. A. Milne

Delphinium scaposum
Let none on Earth oppose ’em:
These Wildhearts of flowers
Choose Rock and Knoll for bowers.

–something I just made up

Let us start with the words. They are hard to read in either image. 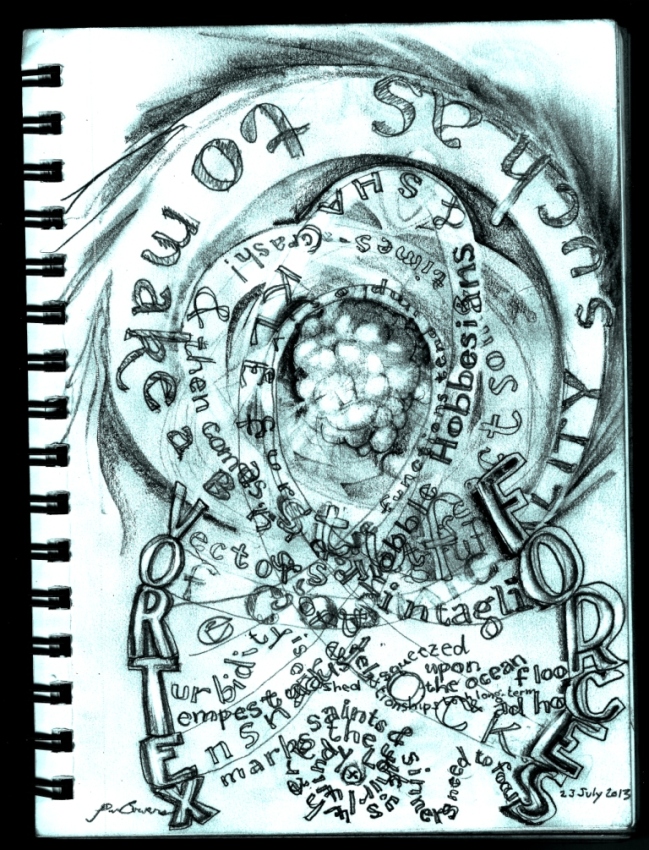 And here is image 2: 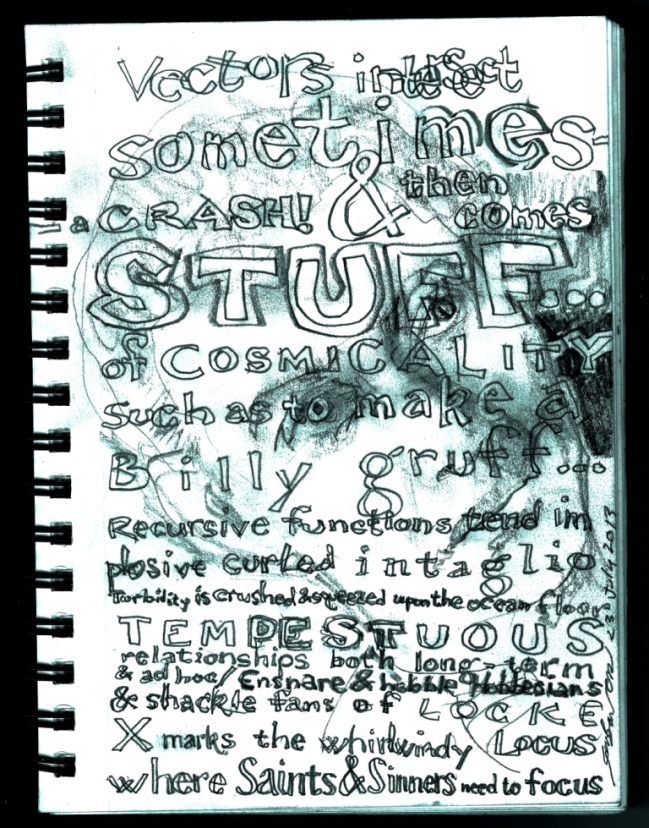 One set of words; two “serving suggestions.” Is one better than the other? Why or why not? 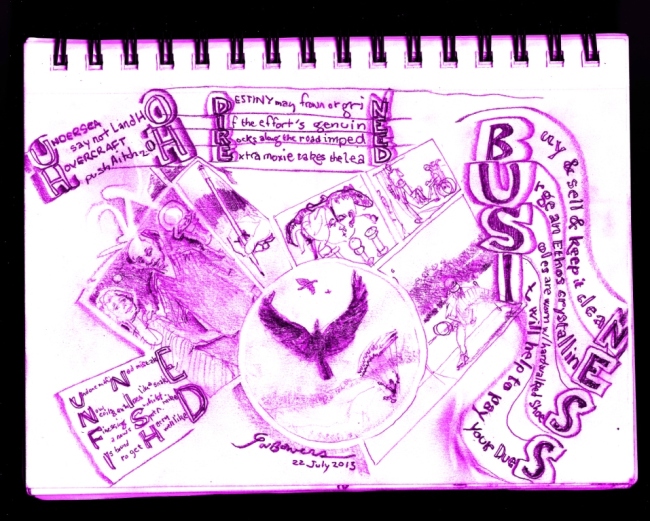 On this page are four acrostic poems and a scattering of images. In all the images are indications of Gamesmanship, a few involving chess pieces. One image has a horse as background, a kissing couple framed by the horse, and three fuzzily-defined chess pieces in front of the couple. There’s also a tennis player waiting for a serve; a balding man flanked by Queens; a soaring hawk and a gliding parasail; two marathoners, one a runner and one a wheelchair athlete; and a hand grasping a long pencil–the last a bit of Draughtsman Versus Blankpage gamesmanship.

The acrostics go from the semisilly to the earnestly serious (Business). Here are their words: