a smile at the corner of your mouse

you may say he isn’t really
anything at all
but his tale’s a peach a dilly
he will answer–call! 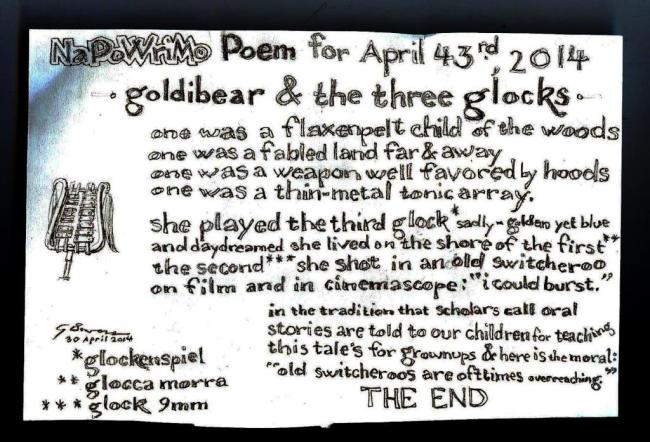 she played the third glock* sadly–golden yet blue
and daydreamed she lived on the shore of the first**
the second*** she shot in an old switcheroo
on film and in cinemascope: “i could burst.”

in the tradition that scholars call oral
stories are told to your children for teaching
this tale’s for grownups & here is the moral:
“old switcheroos are ofttimes overreaching.”

This is a happy day, Friends. It’s the LAST DAY of National Poetry Writing Month, and with this poem I fulfill the requirement I set for myself of writing at least one poem each day of the Month.  I feel like I am crossing the Finish Line; even so, I might try to squeeze off seven more poems/posts for a nice round 50. (Or might not. [smiles])

the aegis of ms dee eyewhy

drifters in the soup

[note: “eegee” is long for e.g. which is latin for exempli gratia which means “for the sake of example”]

much of the earth’s population including me is popsicled

and now there’s a dream-typical jumpcut
and i’m thawed a few hundred years hence
sitting at a table where they’ve set antique food & drink to comfort me
(they got the idea from the movie 2001: a space odyssey by stanley kubrick & arthur c. clarke)

skipping the technical details of cell rupture repair and such
(read the book 3001: final odyssey by arthur c. clarke about the resurrection of frank poole if interested)
i’m now watching in my dream the conversation between my future self and a disembodied voice
which having brought me up to speed now invites me to go out and about

there was a framed quotation from john ruskin on the wall from the start:

“There is scarcely anything in the world that some man cannot make a little worse,
and sell a little more cheaply. The person who buys on price alone
is this man’s lawful prey.”

i have found that the converse is true:
“there is scarcely anything in the world that someone can make a little more fancy or fancifully
and sell for a little bit more
and the person who buys on product recognition alone is that someone’s lawful prey”
and wowzers–the predators are out in a big way

per chance a DISGRUNTLED RABBI

one die has adjectives
the other professions

[yes, the poem is finished]

Here’s a four-liner in response to my friend Bob Kabchef’s challenge in his “Tidal Thursday” post. We were to use at least three of the words Torpedo, Mine, Buoy, Moor, Shoal. I bent the rules a little to spice it up…

Unindifferentiallizing the Tides with the Power of Asian Verse