SEPT: A group believing itself derived from a common ancestor.
EMBER: A small piece of wood or burning coal in a dying fire.

OCTO: Prefix for Eight.
BE: Exist.
R: The interjectory noise a pirate makes.

The good September’s here, but not to last.

Be both of that as may and as has passed

Ectopic pregnancies, some: touch and go.

Through gauze as underlies a cap and gown

Through portalled Time which adds her to her issue

Out in to Real, with scarcely time to crown.

But some September echoes still resound

Echoic of the Fall of Grace she’d ground. 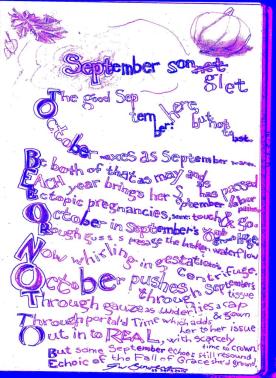