The creatures dress in rags and sheets
And go from door to door
To fill their duffel bags with treats
And leave their egg-toss spoor.

One day a year this feast of frights
Grips Creepy-Crawly Nation
Endorsed by moms and dads and mites
And a Dental Association.

I owe the first line to Henny Youngman–maybe. Not sure. I owe others to either/or/couldbe Mel Brooks, Shecky Greene, Myron Cohen, Shelly Berman, Foster Brooks, my brother Harold, my brother Brian, the playground at William C. Jack Elementary School, and who knows who else. I have no clue as to whether this has been done before, but I swear I have no prior knowledge that it has. At least one line is original with me, and I iambic-pentameterized and rhyme-schemed the whole thing, so sue me at your own risk. Sorry about the mild vulgarity. It’s my nature.

You Hear the One About the Sonnet? Rimed!

He hadn’t had a bite for weeks. I bit him.
You say there’s two holes in the ground? Well well.
That tree bark sure smells funny–must be shittim.
Spring sprung, fall fell, and summer? Hot as hell.

The chicken crossed the playground: other slide.
Milan suppository: innuendo.
Hey, Jekyll, you can run, but you can’t Hyde.
Take loud Viagra for diminuendo.

Hey, circumcise me–here’s a half-off coupon.
It’s black, white, red all over–sunburned zebra.
A shirt’s an awful thing to get your soup on.
My checkbook’s always balanced–it’s a Libra.

You stared and got run over? Them’s the brakes, deer.
A Bardic urinal instruction: Shakespeare.

Yesterday I wrote this, based on something that had just happened:

It got a good reception on Facebook, but I felt there was more to be said, so today I did this: 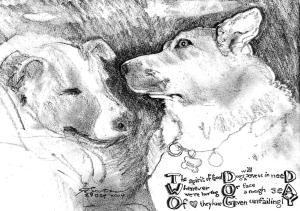 The words to the triple acrostic:

The theme of this spot-welded image and acrostic poem is that it’s a crying shame when evangelical parasites use deific archetypes to bleed believers dry. It is an old, old message, but it still needs to be told, based on what I saw on certain TV channels when I was working graveyard this year. I hope I have told it in a new, engaging way. I hope also that it is not viewed as a slam against any particular creed–just of the ghouls who use the faith of innocents to further their base ends. 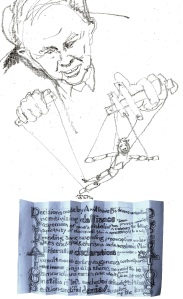 Suppose you sustain a groin injury. Suggestion: STOP Sustaining it. Overrule it! Get in a tub full of hot water saturated with bubble bath powder. Talk your head off about your unreasonable dreams. Soak–and sure as Annie Oakley’s aim, Happiness will visit you. But That’s Not All! SOPH of One Tree Hill will magically arrive–then URSA from Superman II–then a package specified DROP SHIP, direct from the manufacturer–and finally, Bigfoot the YETI herself! (What–you thought she was a he?!) Four words properly aligned thus yield five words, 60% of which refer to beautiful females. For indeed, Ms. Yeti is beautiful. Prepare to die if you tell her she isn’t.

When we gain loss.  Via golden irony

Puts a fish in a blender for a roughy smoothie

And that is a lawful crime

A doodle became a roselike flower. One of the leaves refused to be filled in. I pretty much sat back and watched as pretty much everything BUT the albino leaf got filled in. It ended up whimsy, with the punchline of a joke I heard fifty years ago as the last word, and not-whimsy, bringing up the issue of the genetic cards we get dealt.

pigmentlessness
oft afflicts
when the Trickster
interdicts
normalcy
with biobleach
chromosomal
underreach
did it choose to be albino?
it’s a hybrid: elephino.

There’s a poetry interpreter out there who looked at Pablo Neruda’s “Si Tu Me Olvidas” (“If You Forget Me”) and broke it down stanza by stanza, relating the words to Neruda’s European exile and his pursuit of Wife #3 while touring the continent with Wife #2. I owe most of what I know about Neruda so far to a few poems I’ve read, and the blog post about “Si Tu Me Olvidas.” So I don’t feel qualified to acrosticize Neruda; but I did do a portrait with some possibility. 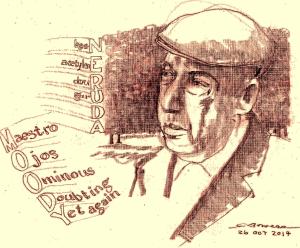 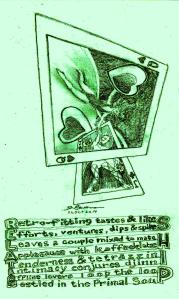 Less than an hour ago “In a relationship” became “In a domestic partnership” in my Facebook settings. Some hours earlier my partner, Denise, made a lovely blog post, about our trip to the Pinetop-Lakeside area, in which she referred to “My partner, Gary.” (Here’s a link to that post: http://aintnoninny.wordpress.com/2014/10/25/autumn-in-the-white-mountains-apache-country/ ) So we have made our partnership semi-online-official.

I liked the idea of slicing Relationship into Relation Ship. Sometimes there is a ship to steer, and for sure there will be chopwater, sandbars and squalls to navigate. Much depends on choices of battles or compromises, the rheostat setting of respect, and the prioritization. Denise and I have a long way to go. But we have come a long way together as well, and love is there.

Here are the words to the double acrostic:

A duodecahedron is a twelve-faceted figure, each facet of which is a pentagon. It is one of five volumes possible in our Universe that has sides made up of the same “regular polygon” (sides of equal length and interior angles all equal). The other four “Platonic solids” are the tetrahedron (four facets), the octahedron (eight facets), the ocosahedron (twenty facets) and the hexahedron (six facets). The hexahedron is much more commonly known as the cube. And the duodecahedron is much more commonly known as the dodecahedron.

HEY, WAKE UP!!! That goes for me too. Sorry to throw such dense Solid Geometry into the mix so early, when the subject really is Testicles.

Testicles occur mostly in males. They are responsible for the manufacture of DNA-headed wiggling bioforms known as spermatozoa. Figuratively, Testicles are a symbol for male bravery, integrity, and effrontery. The word testimony is rumored to derive from the notion that in Roman courts, witnesses swore, not on their honor, but on their manhood. The hand that in American courts goes on the Bible went, so the rumor goes, elsewhere when a witness was sworn in.

In my drawing, the fellow in the tuxedo standing on one of the facets of the duodecahedron, looking somewhat like Antoine Saint-Exupéry’s The Little Prince, only with a goatee and a number of girls clinging to him, is Valley of the Sun poet and impresario Ernesto Moncada. He is also known as “Ernasty.” I have drawn him to metaphorize the idea that he is a Chick Magnet.

Ernesto showed up on my drawing unexpectedly, but as it turns out he is absolutely essential to this image/text. Some years ago at a poetry reading I saw Ernesto recite and perform a lengthy Paean of Praise to, of all things, his testicles. Cojones. Huevos. Balls. He rang many changes on descriptions of his testicles, and you could almost hear them clang. He had the audience laughing, gasping, and OMGing uncontrollably. His performance compelled me to do a page on him with the double acrostic ERNESTO MONCADA/THE POTENT FORCE. Interested parties will find the page in my chapbook LIVES of the Eminent Poets of Greater Phoenix, Arizona (Vol. I).

Years later, this morning in fact, I imagined a remake of Sam Peckinpah’s BRING ME THE HEAD OF ALFREDO GARCIA starring my colleague in poetic ribaldry. It would be called BRING ME THE BALLS OF ERNESTO MONCADA. You might say that with this page I have brought them to you, and to the world. World, you’re welcome.

Difficult whilst dining on a plate of fresh Fatoosh
Underwriting policies & playing Scaramouche
Omnipresence brings with it a need to act unscripted
Dune & Brashstreet now require a qualified encrypter
Evangelicals still YES! as skeptics NO! NO! NO!
Custom-facet everyone & all will be très bon