Kids in the Valley of the Sun growing up in the late Fifties (or Sixties, or Seventies, or Eighties) were in a sense the luckiest kids on Earth. There was something on TV that was special beyond belief. Early on it was called “It’s Wallace?” and its name changed over time, but it was where you could see not only great cartoons but a fine ensemble cast. There was Wallace, the host–wore a polka-dot shirt and a funny hat, liked to sketch on an easel with Magic Marker, congenial and yet subversive–and there was Ladmo: tall guy, tall top hat, outrageously huge tie, rubber longface, sweet and gullible. And there was an insufferable Scottsdale upper-cruster with blonde locks, sometimes Dutch-boy straight, sometimes curly, dressed in mutant Little Lord Fauntleroy garb. That was Gerald. There was a delusional unsuper superhero who claimed to be able to rip apart phone books and crush uncrushable objects–but even the Ajo (population low, low, low) phone book was too much for him, and while he did manage to crush a Hostess Fruit Pie in his bare hand, it took all he had to do so. That was Captain Super.

And there was a salty old lady in a shawl with a glad eye for a gray-haired Phoenix cop. She told fairy tales that were not only fractured, but twisted. That was Aunt Maud. And a Gunsmokey guy without a clue. That was Marshall Good. And a dissipated, dispirited clown who demoed his bag of tricks, like a triple-take with nyuk-nyuks. That was Boffo the Clown, also known as Ozob the Clown. And there were many others.

All but the first two mentioned were performed by Pat McMahon, who, more than a decade before Saturday Night Live came to be, brought a Sybil-like spectrum of zany personalities to the service of sketch comedy. He had endless energy and he could improvise like nobody’s business. As Gerald he responded to boos from the kids in the studio audience with the pristinest of prissy hissy fits. “Public School brats!” he’d rage.

There were dozens of other characters. One attained national prominence via Steve Allen–the gargantuan-eyebrowed, juvenile-delinquent-haired Hub Kapp, who with his Wheels performed on Mr. Allen’s show in 1964. Interested parties need only do a search on “Steve Allen” “Hub Kapp” to find a video of their performances.

After Wallace, Ladmo and Gerald-et-al folded up their TV tent and transitioned to legend, Mr. McMahon had–and has–an enormously successful career as pitchman (examples: HBO, Ottawa University, Lennar Homes) and radio (KOOL 94.5) and TV-show host (Arizona TV). His body of work is enormous and impactive. One impact is on me, who at 60 years of age still have enough kid in my heart to think of Mr. McMahon’s endlessly inventive shenanigans and smile–and chuckle–and laugh out loud. So I mustered all the wherewithal I had to do this page of him.

Funny how this makes two limerick acrostics in a row. The limerick form does suit the subject’s Irishness. I was only able to directly reference two characters, but “Alakazam” evokes Wallace’s summoning of Captain Super with a magic wand. However, the Secret Word was not Alakazam, but “JUSTICE!”

Yesterday I was looking at the Rotten Tomatoes movie-review website and the movie poster for  the comedy documentary MISERY LOVES COMEDY came up. It features the co-creator of SEINFELD (and admitted model for the character George Costanza), Larry David. He has a beautiful, open-countenanced grin on his face, and I was drawn to drawing it. As I drew it occurred to me that his name lends itself to a double acrostic of five lines. The next thing to occur was that a limerick has five lines. I’ve written hundreds of limericks. Why not one more?

Well, one reason why not, in this case, is that DAVID is a lousy right-side bookend for a limerick’s double acrostic. D and D end letters can easily be made to rhyme, but not with the third partner, A.

But LARRY, while a challenge, is doable. Many French words end in L and are pronounced with a long A. L and A and Y are mutually rhymeable. And with Cirque du Soleil partaking of skewed thinking, as does Larry David, the rhyming became an easy L A Y indeed. (Bad pun of the day. I am sorry, a little bit.)

And if my portraiture misses the mark a bit (I don’t think it does, but I’m not the person to ask; you are) I can always claim I didn’t draw Larry David, but David Larry. Same goes for the content of the limerick if it’s not such a good match.

Last April I was such an enthusiastic participant in National Poetry Writing Month that I wrote 44 poems in 30 days, posting them on this blog. This time around I did not participate, though of course I’ve written some poetry this month, including “the apotheosis of abigail van buren,” posted yesterday. Now I find I’m vaguely tempted to do 30 poems in 5 days. Let me not do so, please, O Muse. Let me just write one GOOD poem.

It is most blues songs. The blue is a powder blue today. 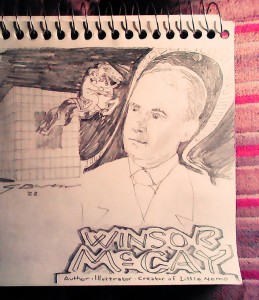 to the spirit of winsor mccay
i have thatthere and thishere to say:
you drew like a wizard
your drawings a blizzard
that sculpted your times and today.

Whether dancing in diaphanous veils, or infusing a slam performance with her lovely singing voice, Crystal GKill is entertaining and astounding. I had the good fortune to run into her at a writing conference in Phoenix last weekend, and she graciously allowed me to take her picture for the purpose of doing this page.

Here are the words to the acrostic:

Yet she’s outside the box, not by the booK
You’ll give her 10 to get another looK

All accolades attest to her fine skill

no fire in the belly right now but some rumblings

there was a writers conference at phoenix college yesterday
jana bommersbach read from her book about a woman unjustly lynched
beth kendrick described an exchange with her editor that led to rewriting; “the jell-o had set”
(personal: crystal gkill may be the subject of an acrostically poetic page)

hope has been a slowly rising variable for the last three weeks
(some wonderful spikes; some awful troughs) 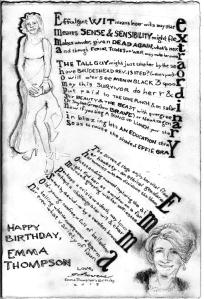 It is no longer Emma Thompson’s birthday in England. It is barely still her birthday here. I wish her many happy returns of the day, and I thank her for so many extraordinary performances, for her heart on her sleeve, and for being her age (56 now) and being it in style. I love you, Emma!

Tomorrow is a special day. The Emma Thompson Project, Segment 6 of 6, will be published. I will then move on to other matters, and the magnificent Ms. Thompson may breathe a sigh of relief. (I’m NOT a stalker, but I seem to be playing one on WordPress. 🙂 )

Meanwhile, all but one of the images that follow may be considered in the same vein that a rocker’s bootlegs may. They are unofficial, not part of the Project, just “I didn’t go yet” loosening-up. The page with the sonnet, though, will play a part in Segment 6. If I can wrestle the sonnet into a less forced-seeming array, I will. But if not it will be on the final image word for word. It is a more ambitious job of wordsmithing than the one I did for Theodore Sturgeon: fourteen lines, iambic pentameter, double acrostic saying EMMA THOMPSON IS EXTRAORDINARY, mutant Petrarchan rhyme scheme, with exactly one of her past, present or future movies or series resident on every line. The extraordinary Emma Thompson, intuition says, must have an extraordinary sonnet. 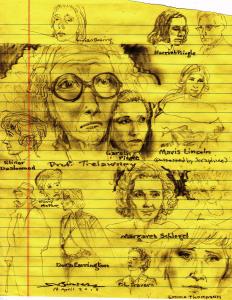 This time round the artist tried too hard. The elusive likeness was approached, lost, briefly glimpsed, and lost again. Finally a little confidence was gained, strangely enough, when the cause was seen as lost and there was nothing to lose.