As my friend and event credentials benefactor Russ “Karaoke Fanboy” Kazmierczak and I strolled into the exhibitor’s area of the 2015 Phoenix Comicon, one of the first things we saw was a banner at one of the choicest tables, close to the entryway. On the left side of the banner was the image of the head of a man of indeterminate years, tanned to perfection, with evangelist’s hair and a Gary Player grin. JIM STERANKO was in two lines in italicized caps across the right side.

“Looks like he’s had some work done,” I said to Russ.

“Looks like the BANNER’S had a lot of work done,” Russ replied. And we laughed. Meanwhile, my reaction to the prospect of meeting one of the legends of the comic-book world was setting in.

Jim Steranko, escapist and card sharp, was the writer and penciler of an amazing succession of NICK FURY, AGENT OF S.H.I.E.L.D. segments in the late 60’s. It can be argued that if not for the popularity of those ’60s Nick Furys, Samuel L. Jackson would never have had occasion to put on an eyepatch. Certainly Steranko’s innovative comic-book continuity storytelling, which included movie-storyboarded jump-cuts and psychedelic effects, influenced countless artists. Even Neal Adams, himself a titan of the field, did a DEADMAN panel wherein the energy rays coming up from an abyss, if looked at with the paper almost on its edge, formed the phrase “Hey, a Jim Steranko effect.”

Before I could worry about whether the REAL Steranko was going to show, or a mere salesperson of his, THERE HE WAS, magnificent hair, powder-blue retro/leisure suit, and all. He had placed an array of prints of his artwork on his table. One series was of cheesecake pinups girls, in the tastefully nude Alberto Vargas style, in superhero costume. These were going for $5 each. Bargain!

Russ was urging me to say hello to the man Stan Lee called “Jaunty Jim.” I was a combination of too shy and too afraid to act like a gushing fanboy. So Russ, a calm, poised, NONgushing fanboy, chatted Steranko up a bit, first asking if he’d mind signing the posters he was buying. Steranko put a “Lemme put it to you like this” expression on his face and picked up and pointed to the placard that indicated that his signature bumped up the price $10. (Neither of us had the money; in fact, Russ was using his last few dollars to buy a poster for me, since I was totally broke.) Then Russ handed over the money, all singles, and asked if we could have a picture with him. Steranko demurred, saying his only exception to the no-pictures rule was for gorgeous, hot females. We didn’t qualify.

Now comes the REAL story. Russ Kazmierczak is the creator and life-force of AMAZING ARIZONA COMICS. He’s cranked out at least ten issues of a mix of superhero tales and regional satire involving local bigshots, including Sheriff Joe Arpaio and former Governor Jan Brewer. His first superhero, Speed Cameron, has super-speed, somehow by virtue of the fact that his DNA has been commingled with that of a…speed camera. (Ticketing of speeding drivers via automated motion-capture cameras is a local, and controversial, phenomenon.) Russ uses Arizona as the backdrop of his stories, giving his growing but still tragically small fan-base the thrill of recognition of such locales as the Phoenix Melrose district.

Here’s the man himself, perusing He-Man, one of his favorite superheroes when he was growing up.

And here’s the man himself being interviewed by KTAR radio personalities Mike Russell (in Captain Morgan garb) and Pamela Hughes (a STAR WARS storm trooper, with a probably-unnecessarily modified breastplate). If you were lucky enough to be tuned in to 92.3 at 9:12am on Friday, May 29, you heard Russ more than holding his own against these two. 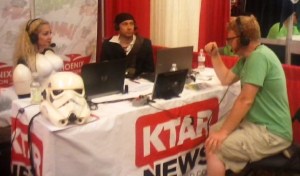 At Phoenix Comicon 2015 Russ shares booth space with “Ali-Kat’s Curiosities.” He’ll be there all day today, May 30, and tomorrow the 31st as well. So if you’re in downtown Phoenix, and strolling by the Convention Center, any time between now and Sunday evening, I urge you to find your way to Russ’s booth/world. You will see people who have gone to extraordinary lengths to look both good and superheroic, like this chap:

You may well see a local legend of incredible longevity, Dave Pratt, making people dance with his radio ways just as he’s done for the last 30 years. You may even see Steranko, who will be happy to sell you something. But what you’ll tell your grandchildren years hence is that you met and talked to the one and only Karaoke Fanboy, Russ Kazmierczak, Jr.

Still warming up for Index Card A Day. Looser and tighter at the same time with the drawing. Don’t know why the eyeballed skeleton showed up. 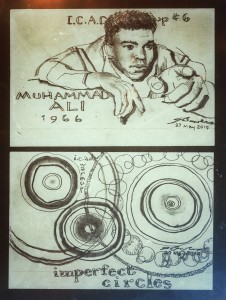 Here are two warmups for the upcoming I.C.A.D. project. Though their subject matters are different, they share an odd compositional similarity.

Fun fact: the sigil of the International Flag of Earth is interlocking circles, white on bright blue, designed to be visual both Earthside and in space.

the trouble with the robert frost
“two roads diverged…” encyclical
is that the two roads are just two.
in real life, it’s so complex:
the crossroads is a dandelion
of three dimensions, maybe more.
some circumstances force a move.
some preferences are imposed.
and fear, that strongarm bully, steals
the will from making wisdom count.
at times a traveler suggests
just with a smile: it’s time to go.

each breath inhaled is choosing life.
each kiss exchanged is choosing love.
each journey says a better place
awaits. but journeys may play false,
with distance that no yardstick tells.
the real journey’s in our heads,
in touching soul-to-soul; in goals
we keep, or not; in choosing words;
in scratching itches till they bleed
then learning that they’re best ignored;
and letting go begins a trek
along a path that must astound.

There’s a group on Facebook that is revving up for a two-month stretch of daily artwork on an index card. This is known as the I.C.A.D. Challenge, and it runs June 1st through July 31st. Meanwhile, group members, including me who just joined, are warming up, some with one of the ten prompts the group leader has provided.

I got my feet wet yesterday with one of those prompts: “Make a doodle of your own name.” Today I did a prompt of my own inclinative devising: “Draw one of your personal heroes.” I drew Jack Kirby, using as photo source one of the photographs in the book KIRBY: KING OF THE COMICS by Mark Evanier. This book was loaned to me by Russ Kazmierczak, Jr., who, when he saw my index-carded Jack Kirby, urged me to post it. So here we are. 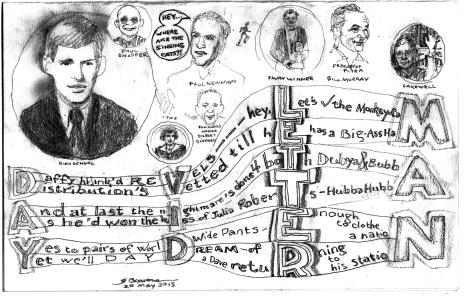 The last Letterman aired tonight. Most of this page was done during the show, but I wasn’t quite done when the show was, so I kept going till 11:59 PM. So it’s all DAY OF the show, anyway.

Daffy hijink’s revels–hey, let’s check the Monkey-Cam
Distribution’s vetted till he has a Big Ass Ham
And at last the nightmare’s done for both Dubya and Bubba
As he’d won the kiss of Julia Roberts–Hubba Hubba
Yes to pairs of World Wide Pants–enough to clothe a nation
Yet we’ll daydream–of a Dave returning to his station

I just finished watching the climactic conclusion to MAD MEN, which has been hyped to pieces and made the capstone to a binge-watching marathon. I trust it won’t spoil things for those who haven’t yet viewed it to say that I hope that the Coca-Cola Company paid through the nose for what must be the ultimate Product Placement. I also wonder if the series was conceived with this punchline in mind. I note the precise timing of the ending with one of the most famous happenings in advertising history.

Remember the scene in WAYNE’S WORLD where Wayne and Garth scoff at “selling out,” all the while holding up blatant product-placement products? Pepsi was one of those products. I wonder if this whole series was Coke’s revenge.

Mad (brought to you by Coca-Cola?) Men

Merchandising brought this dream
M I N E D to order per a scheme
AVARICE, you weave your lace
And you net by product’s place
Does this coca-chewing clan
Deal in…cola? That’s the plan 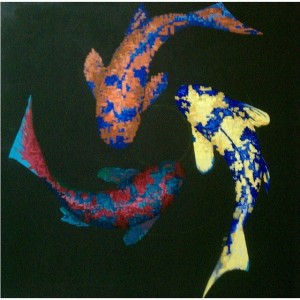 Here, as Paul Harvey used to say, is The Rest of the Story regarding my transaction with Rachelle Olsen (see last post). Rachelle and I got together at the Clarendon Hotel in central Phoenix, where she was displaying at a phenomenal exhibition called ARTELPHX 2015. She had my painting, but it was not the painting she’d initially offered (see last post). Instead, it was “Koi III,” a painting I had publicly expressed a particular fondness for. It had been on display at the Fair Trade Cafe with a price tag of $275–and believe me, that’s a bargain. Even at the price it represents the highest payment-in-kind per hour I’ve ever made writing. (Previous record $26.00/hr. Nice work when I could get it!)

Ownership of this magnificent painting has its perks. The image makes a fine screen saver and can be photoedited to suit a mood or occasion. And doing so aptly demonstrates that there is nothing like the real thing. 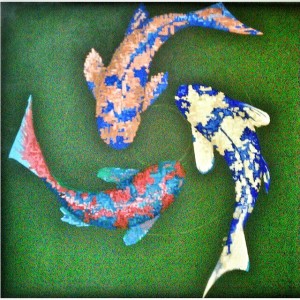 Valley artist Rachelle Olsen, mentioned previously in this blog, made me an offer I could not refuse. If I would write her “Artist’s Biography,” a succinct crystallization of her artistic focus, career and philosophy, she would pay me either in cash or a painting of hers. No fool I, I chose the painting. This evening I go to pick it up. It looks like this: 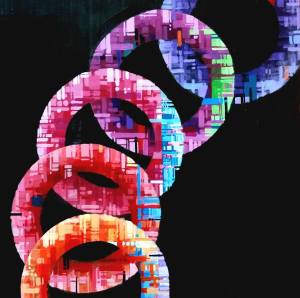 Here is what she got in return:

“Rachelle Olsen is the artistic force behind the Phoenix, Arizona gallery

Impossible Blue Studios, which showcases her paintings in acrylics on wood and

canvas. Born in American Fork, Utah, her upbringing was in Flagstaff, Arizona.

Though she is mostly self-taught, she has benefited from the tutelage of Burdell

Moody of the Belleza Gallery in Bisbee, Arizona. Her signature work is the

depiction of realistic subject matter in a geometrically expressionistic manner,

uniting pictorial elements with pixelesque vibrance. There is speculation that her

work partakes of her unique synaesthetic sense, which occurs in about one in 25

people and which transfers sensory input from one sense to another. She may, for

instance, hear a sound and have her brain ‘translate’ it to sight.

“Ms. Olsen’s work has been showcased in such diverse Phoenix venues as the

Firestage Theatre, the Fair Trade Cafe, and “Equinox” on the Art Detour. Her work

is in the collections of Jobeth Jamison, Eric Shelley, and James Wannerton in the

After we agreed on the deal I asked Rachelle if I could feature her in one of my blog posts, and double-acrosticize her and Synthaesthesia. She readily agreed, and here is what I did.

And here is what it says, synaes-synthesizing all over the place:

Most of us have heard of Edgar Allan Poe, but H. P. Lovecraft was a greater influence on the fledgling horror writer Stephen King. Lovecraft’s TALES OF THE CTHULHU MYTHOS (Kindle-downloadable, by the way) gave me the willies about 35 years ago. This is a long-delayed paying-it-forward. 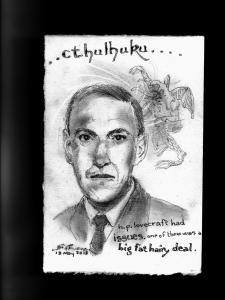 h. p. lovecraft had
issues. one of them was a
big fat hairy deal.