Desperation has many flavors. A child of 13 learns she has new, unwished-for life inside her. A band of brothers and sisters shuffles for the last time out of a factory that is closing. An energetic person with a head full of ideas and plans is told there will be at most six months to do something about them. A man is lonely for a woman who no longer exists.

There is another desperation, one that is needed. When with clear eyes we see the severity and the complexity of the world’s troubles the desperate truth cooperate or die comes to light. Co-operate: operate together in the common cause of survival.

Beef is silent. No more moos interfering with our sensoria. Tear it, grind it–no objection. Eat it in bread and the makings of salad.

That’s how we roll today and will tomorrow. Hearty appetites of the hoi polloi and their satisfaction alter the ethic to accept slaughter as nothing much.

Long ago, Certified Public Accountant John A. Eck asked me if I knew what CPAs used for birth control. I didn’t. “Their personalities,” he said, grinning his leprechaun grin.

This year John did my taxes for what will be the last time, unless I get way above poverty-line income. He also put Artist in the OCCUPATION box on my returns, and included at my instruction $220.00 in income for which I gave no receipt–money I had earned in 2015 for my artwork. This bolsters my artist-identity a great deal, and I’m happy to thank John publicly for that.

I used that taunt more than once in my childhood. That is perhaps forgiveable. But well into adult life I made a cruel joke about a co-worker who had a wide and ample backside. “What’s the sound of [co-worker’s name] getting out of a bucket seat?” [Pause, then insert finger into mouth and make a popping noise pulling it out.] Shame on me.

This post, then, is an oblique attempt at atonement. The illustration is a visual pun: a pair of scissors has been busy cutting remarks. The remarks are all fool-related. “There’s no fool like an old fool” is folk wisdom. “Fool me once, shame on you. Fool me twice, shame on me.” is, according to STAR TREK’s Pavel Chekov, a Russian saying. “They are fools, who eat fugu. But those who do not eat fugu are also fools.” comes from Japan, and refers to a sushi of blowfish that, improperly prepared, will kill whosoever eats it.

The acrostic suffers from the need to put too much content into too few lines. Here are the words, un-acrosticized for better clarity:

cruelty verbalized can be a cancer
ugliness audible: dissing of grace
tap-dance on feelings then ho-hum the answer
sic transit gloria in mists of mace
whether or not we’ll exist to thank God
is anyone’s guess but i don’t like the odds

From here on in, I rag nobody.
Henry Wiggen in Mark Harris’s Bang the Drum Slowly

Plow a furrow through the skies

Land and taxi and eat linguini

And this marvel becomes humdrum

No more worthy of note than a good night’s sleep

Explorations turn to the metaphysical

Pour species has taken the tendency of electrons and the combustibility of certain substances to stratospheric heights, and most of us shrug . . . 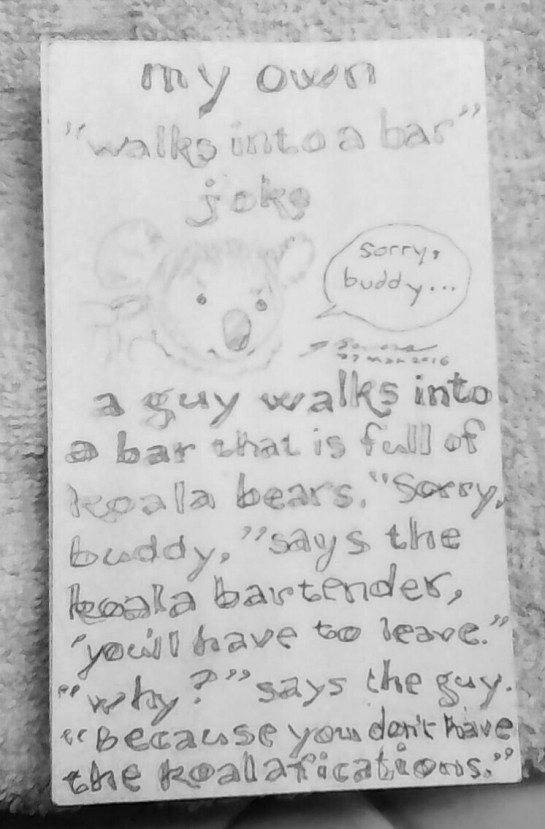 A guy walks into a bar that is full of koala bears. “Sorry, buddy,” says the koala bartender, “you’ll have to leave.” “Why?” says the guy. “Because you don’t have the koalafications.”

Dedicated to the spirits of Poul Anderson and Gordon R. Dickson, co-creators of the Hoka, the ursinoid aliens who hilariously re-enacted various human dramas, including “Casey At the Bat” and The Marriage of Figaro. 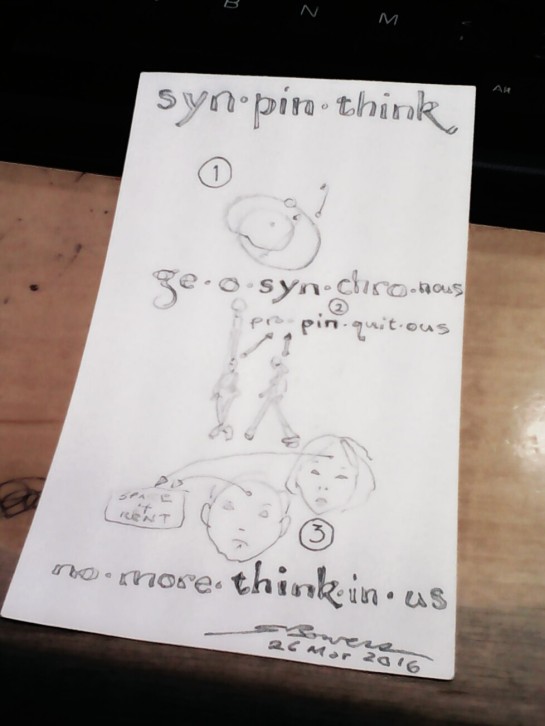 My Mom is in the hospital again. Probably OK, but they’ll keep her overnight for observation. Before I found out, I’d done a card called “two bodies” that began “GARY has two bodies/just as heather has two mommies . . .” and told about my flappy fleshy body being nothing special but my body of work being immortal and immense. It was typical self-aggrandizing crap, and it has now disappeared, and good riddance.

But I left Mom at her urging to go to work, and am now at the library, and, not finding the card I’d intended to post, whipped up this nearly-empty-headed one instead, just to keep every-day-in-March continuity going. I sort of like its clean near-emptiness.

I am known–some might say despised–for my horrible puns. One of the worst is in this narrative. 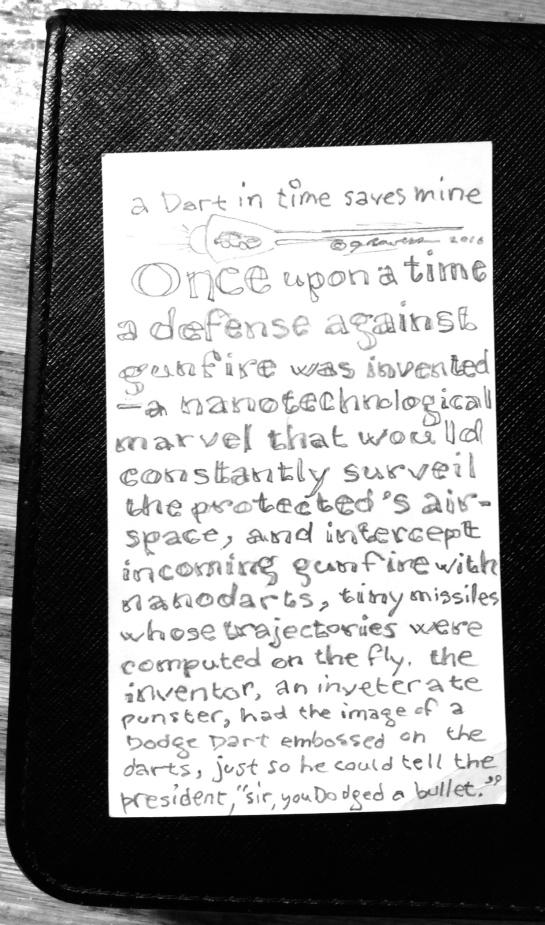 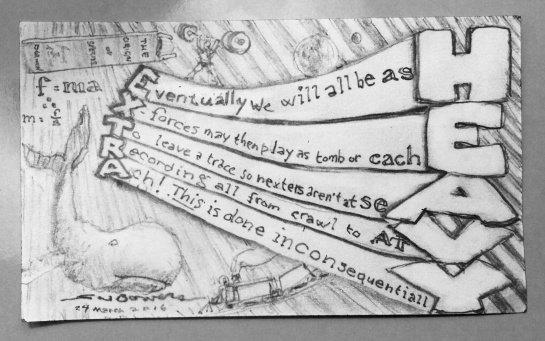 event u al ly we will all be ash

x-forces may then play as tomb or cache

to leave a trace so nexters aren’t at sea

recording all from crawl to atv

ach! this is done inconsequentially

Of tats and wild ‘do

Nor at challenge balk

Give them the keys