In the early 70s I was a huge fan both of the comic book then called DAREDEVIL–The Man Without Fear! and of Neil Young. Not long after Neil’s album AFTER THE GOLD RUSH came out, and I had played it about 50 times (not exaggerating), I conceived a four-panel sequence for Daredevil, using lyrics from Neil’s song “Don’t Let It Bring You Down.” Gene Colan, penciler for Daredevil, would be the perfect illustrator of this sequence–his night scenes were superb. I wish mightily that I had written to the letters column “Let’s Level with Daredevil” and described my sequence.

Forty-odd years later, that stuff is still in my head, and, while I am no Gene Colan, I am a lot better at turning the sight in my mind’s eye to an image on paper. With an hour to go till the midnight Inktober deadline, I had finished the first two panels of my sequence. (I say “finished,” but what I have done is at best a “concept rough.” It would take two hours per panel to do a good job on the sequence.)

I do not have time to obtain permission from either Marvel Comics or Neil Young to use their intellectual property; but I come from a family of outlaws, so I will tip my hat to those two creative forces, NOT use my artwork on this post for commercial use, and hope that some find day I get the appropriate permissions, finish the page, and thrill my early-teen self with the result.

Neil’s lyrics to be illustrated, line by line:

Blind man running through the light of the night with an answer in his hand
Come on down to the river of sight and you can really understand
Red lights flashing through the window in the rain–can you hear the sirens moan
White cane lying in a gutter in the lane and you’re walking home alone . . . 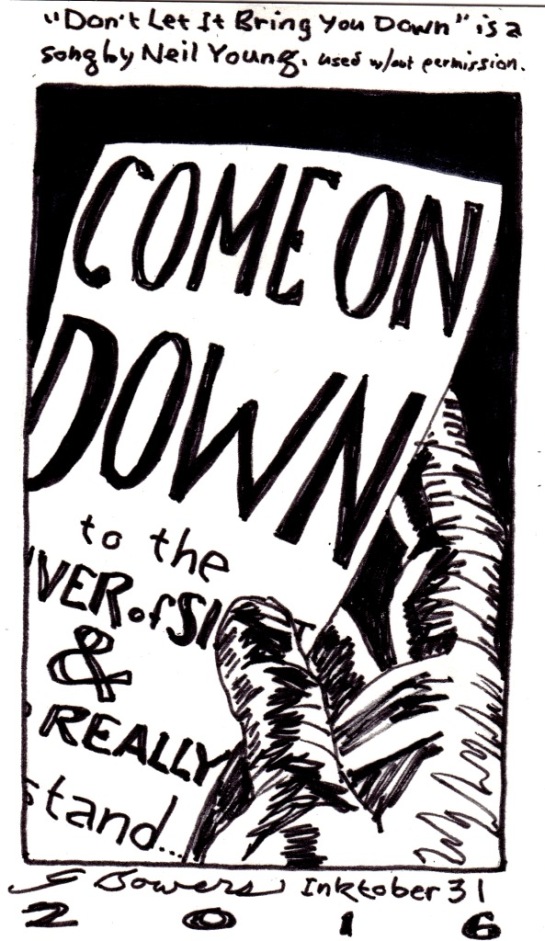 Using famous words in a comic-book sequence is not new. Roy Thomas, writer, and John Buscema, artist, did a page of THE AVENGERS after the archenemy Ultron was defeated and seemingly destroyed, but his head was missing, though presumed disintegrated. It wasn’t, it was on a junk heap. On the final page, panel by panel and line by line, “Ozymandias” by Percy Bysshe Shelley is quoted, while a black kid finds Ultron’s head; examines it; kicks it around; pulls on an earpiece and it goes ZZZZT!, which apparently deactivates Ultron; drops the head, and wanders off for something else to do while captioned by the last line “The lone and level sands stretch far away.”

One difference is that Shelley’s work was public domain. Marvel’s and Neil’s aren’t. So I’m an outlaw, but not for profit, and I hope the powers that be will be merciful.

In 1963 or thereabouts our Art teacher gave us the task of drawing a word so that if you didn’t know English you would know what the word meant. So kids turned in tall TALLs, fuzzy FUZZYs, and so forth.

I remember not wanting to do one that anybody else did, and running out of time to execute my drawing while I was still conceptualizing it. I’m hoping to exorcise the feeling of failure I still have over that by doing–this.

Inktober continues with a demonstration of how Halloween can make us playfully crazy. “Shadowplay” does not mean having fun with shadows, but why shouldn’t it? Today it does.

There are fewer than five hours left in my Inktober. I have four more images to do. If I stop having fun, and the work turns stale, I’ll stop and declare victory, finished images or no. This Inktober has already exceeded my expectations, and brought my drawing hand fully back to life. It would be nice to do it all, though . . .

Do Cats network? You better believe it. There’s a cat in my complex who is fed by many. I haven’t fed this beast, but I acceded to a demand of a walk through of my unit, which was deemed unsuitable. 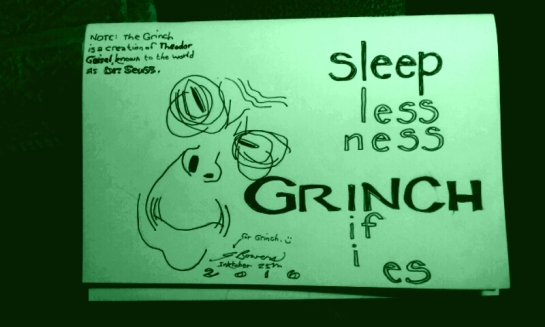 Sleeplessness Grinchifies. I have apologized to my mother, with whom I was rude, trying to quell my Grinchiness. This image is further apology.

The image was not done in haste, but this post is. Much needs to be done between now and midnight. Happy Halloween!

Some artists want to have their fun and eat it too. They want to be taken seriously and they want to maximally enjoy what they’re doing. They want their stuff to look great but they don’t want to spend the extra money to upgrade their materials from “student grade” to “professional grade.”

I confess: I am a big slob. My materials are below “student grade” when I can find them in the Clearance bin, or, better yet, on the street. Even so, making images is one of the most important things I can do, taking a back seat only to building relationships.

I’m using a variety of pens and markers for these Inktober images. I have a chisel-tip Sharpie that is my go-to tool for background blacks. I use it like a lawnmower, overlapping stripes on the area to be blacked. The problem is, corners and detail areas need the equivalent of garden edgers and shears.

I have two go-tos for such, and for drawing elements. They are an old-school Flair pen and a cutting-edge set of Micron archival-ink scribes from 005 up. Both inks are darker than the marker, and it shows, and close up it gives an Amateur Night feel to the image.

Fortunately, photoediting software enables adjustment of brightness, contrast and color. The one that comes with the Microsoft operating system is great at minimizing the difference between the inks, and brightening the light tones, and adding a tint if the image is better for it. I use MS Paint as well to remove smudges or correct mistakes. (A few posts back I had a quote from Dr Samuel Johnson. Stupidly, and in ineradicable ink, I “calligraphed” his name in lower-case as “dr samuel johson.” Paint enabled me to scooch over the “son” and make another “n” out of the lower half of the “h.” No one noticed the fudgework.)

Purists may shudder at these methods–I do myself sometimes–but economics and my own get-er-dun-soonest personality drives this behavior, and I don’t think I am alone; but I felt compelled to advise YOU, dear Reader, of the provenance of these images. I also feel compelled to add that the use of finer materials, and the independence from photoediting, almost always results in a better image. The problem is it can take a LOT longer to do it that way, and I don’t know how far over the horizon the end of my life is–and I have SO, SO many more images to make!

Thanks for your attention!

The Inktober prompts include “Battle.” An Altercation is synonymesque, but perhaps not synonymous. Cats are capable of fierce battle, as anyone who has seen a sincere cat fight may attest. This moustached bald guy is also battle-capable, but his stance and the expression on his face connote reluctance. The axially oriented doodads may be totems, or power sources, or mood indicators, or some supra-realistic transceivers–throw in a lot of And/Ors, and add what you will. You now have the image electrochemically preserved in your cerebral cortex. Consequently, it is now yours as well as mine, and you are free to make what sense of it you wish.

Some time ago, in a Village of Oak Creek far, far away, I used pencil and then photoediting software to make an image I called “Spoon, Water, Glass.” When I post this blog entry it is likely that “Spoon, Water, Glass” will be listed as a related post, simply because I’ve just mentioned it twice. I hope it does. I don’t want to have to search for it, and I do want to compare it to this one.

If I had done a similar treatment with versification, I might have written this:

so they do. in this case
glass encases water.
case the joint and kiss face
if you think you oughtter.

–Well, as Old Lodge Skins was wont to say, “Sometimes the Magic works, and sometimes it doesn’t.” But every time you try, the Magic gets another chance.