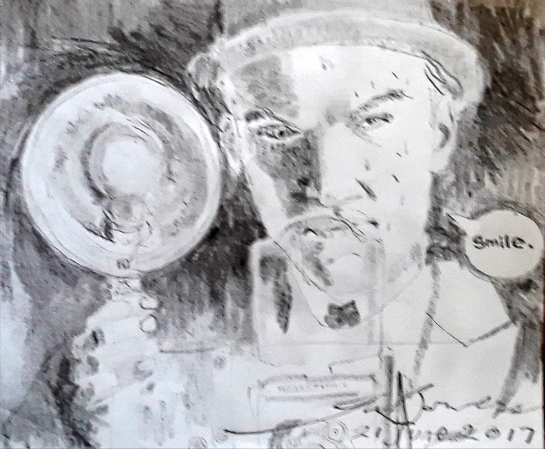 Wkipedia tells us that David Jude Heyworth Law, born in 1972, was first-middle-named after both the Jude of the “Hey Jude” of the Beatles and the Jude of the JUDE THE OBSCURE of Thomas Hardy. Jude Law, as we have come to know him, makes a good match for this mixture.

And he has been paired with some fine actors, among them Matt Damon, Haley Joel Osment, the junior Robert Downey, and, as illustrated above, Tom Hanks, who is at once off-camera and camera-captured in this endgame scene from ROAD TO PERDITION. (I added the “smile” word balloon to resonate with the cover of the classic BATMAN: THE KILLING JOKE graphic novel.) Law plays an evil hit man who double-dips by sellimg photos of his victims to the press. He is chillingly mundane, and great, in this role, one of many weird roles he has had for which he was a perfect match.