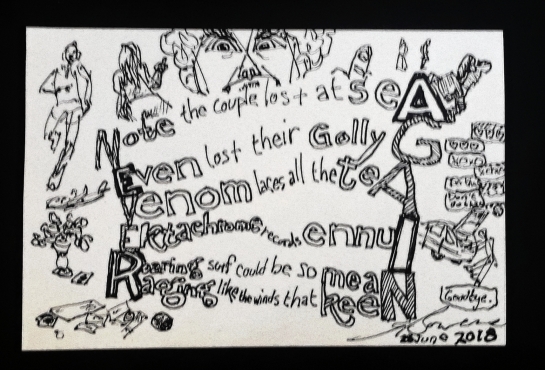 Tempting as it is to designate ER as “Emergency Room” and AI as “Artificial Intelligence,” for this acrostic they are the actual words “er” and “ai,” both interjectory “words to express.” “Er” expresses hesitation, and may be found in any number of the 60s-era DC Superman comics, when Clark Kent says something like, “Er, Lois, I think I left something at my desk. Go on without me.” “Ai” expresses sorrow or fear, and is used by Tolkien at the Bridge of Khazad-dûm when Legolas says, “Ai! a Balrog!”

I have a friend who had a breakup/make-up cycle so persistent he would say things like, “So anyway, after the final final FINAL breakup, there we were…” poor him and poor her.

This is a page about breaking up. Hesitation, then sorrow, then resolution: Never again. Here are its words:

Note the couple lost at sea

Even lost their Golly G

Venom laces all the tea

Here is something that may frustrate–a metaphorical bone with not much meat on it. It is a challenge to the viewer’s storytelling skill, done in the hope that intriguing stories may occur where none before existed. 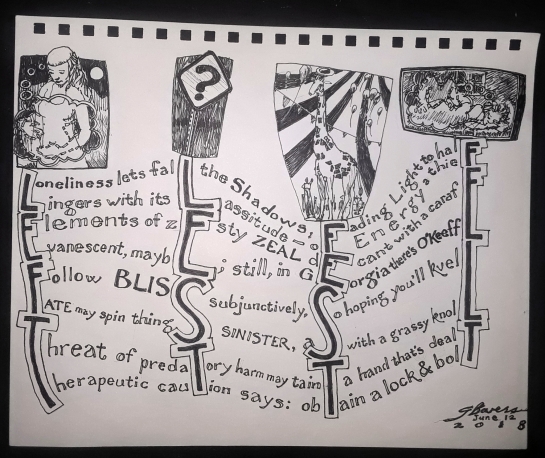 I’ve finally punched through my creative block (it took weeks) and completed and signed the above page, “Left/Lest/Fest/Felt,” an illustrated acrostic poem inspired by Marta, my new friend from Catalonia. I dedicate it to her.

Marta, I wish it were better. I tried too hard; wanted it to be good too much. I tried and failed to make the illustrations obviously relate to their categories. Perhaps I will return to its complexities after I fully re-establish my momentum, but most likely not. I hope the hard work shows.

Here are the words:

Loneliness lets fall the Shadows, fading light to half

Lingers with its lassitude–of Energy a thief

Elements of zesty ZEAL decant with a carafe

FATE may spin things SINISTER, as with a grassy knoll

Threat of predatory harm may taint a hand that’s dealt

[First published in the poetry group Poets All Call in Facebook. Heartfelt thanks to Socorro Olsen and Joseph Arechavala.]

In part 1, I described taking on a new art/poetry project, getting to the beginnings of the page design, and then hitting a block wall. The wall came up when I looked at what I’d done and found it foolish and amateurish. The acrostic lettering was floppy and scrawly. The end words I’d chosen seemed like seeds for verse idiocy. I got a hint of the worst F word there is in English: Failure.

So I put aside what I had done and tried to loosen up my drawing hand and build up some mojo. One thing I do to practice portraiture is watch a DVD and freeze the frame when I see something I want to draw. 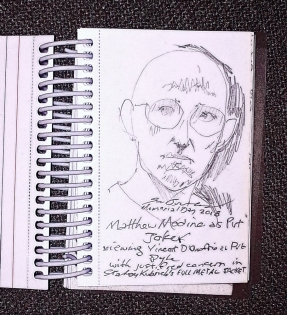 So here are Karl Urban and Matthew Modine, from their movies BENT and FULL METAL JACKET. I was medium-happy with these, though I should have taken more time with them.

I also worked out  a set of words for the acrostic, thus:

Loneliness lets birds to feed on half

Effervescence gives us a giraffe

Finding a subjunctive scheme’s a goal

Tactile predators will touch a colt

The lines relate, though not sequentially, to Left/Lest/Fest/Felt. Loneliness relates to being Left. A giraffe seems intrinsically Festive. The word Lest is subjunctive, i.e. conditional. And tactility and predation relate to Felt.

The lines got tweaked when I calligraphed them, and became this:

I also worked on the illustration some, but the results were so bad that I will not reproduce them here. Still, I gave that block wall some of my best punches, and cracks are developing in the masonry. For good or ill, part 3 of this multipost will include the final form of “Left/Lest/Fest/Felt.”