I was doing my dishes this morning, enjoying the use of the Bachelor’s Tip regarding hand-washing dishes, which came to me a few days ago:

BACHELOR’S TIP: When hand-washing dishes, every fourth time or so, don’t open the soap bottle. instead, just run hot water over the closed nozzle. There will be enough post-nozzle congealed soap to make your dishwater nice and sudsy, AND you’ll prevent that nasty, gross Congeal Buildup.

This Tip should have occurred to me years ago, but I wasn’t paying enough attention. And so it is with much of our life’s endeavors. We do things a certain way because we have always done them that way. We don’t think of better ways.

So the word destiny floated up from the suds in its metaphorical way. And it made its way to one of the blank index cards I have on hand, and it was surrounded by other stuff, thus: 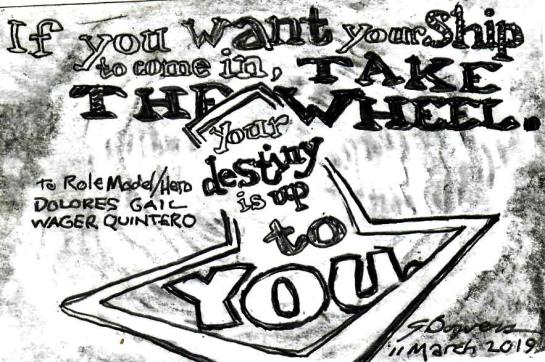 The Role Model and Hero I refer to is my Glendale High School classmate Dolores Gail Wager Quintero. In her storied lifetime she has had two full careers, one as a Government agent and one as an inner-city teacher of science and mathematics and general knowledge. And that’s just the visible portion of the iceberg. Among many other achievements, she also earned a tailor’s license and is handy enough with tools to have rigged up her own dash-cam for her vehicle, the appropriately named Fit.

Years ago Dolores was diagnosed with an aggressive form of breast cancer, and if she had cooperated with her doctor’s prognosis, she would have been long gone. She did not and she is not. She was supremely proactive in her medical care, doing extensive research and not taking anything for granted. She pays attention to both opportunities and pitfalls. So ought we all.