I have done more than a dozen portraits of my co-workers at Matt’s Big Breakfast. A couple of weeks ago I approached yet another. She declined, but offered to send me a photo of her beloved and now deceased dog instead. I would rather have done hers, but I do love dogs, so I told her to go ahead.

“Gie” is a genuine word. It is Scottish dialect for Give. The poet Robert Burns famously coupleted

“O wad the power the giftie gie us
Tae see oursels as others see us.”

Burns also famously coupled, fathering many children out of wedlock, but that is another story.

Dog gie. “O wad the power a guid dog gie us/Tae help us truly, truly BE us.” I was best friends with such a dog. His revered name was William Doglas Bowers, known colloquially as Bill. We lost him ten years ago. A thought of him draws an eagle’s feather over my heart now and then.

old english sheepdog shih tzu corgi
of grins and snuggles is an orgi.

great dane alsatian malamute
Got Ugly? even so, Got Cute.

My faulty memory tells me the story of the Tower of Babel went like this: Once upon a time many people got together to construct a tower that would go all the way to Heaven. This cooperative effort went swimmingly until God took notice and was displeased. God foiled the effort by turning one language into many, amongst the workers; unable to communicate with each other, they quickly abandoned their efforts.

I just don’t think anything like the Tower of Babel story happened in real life. Construction workers the world over helped build New York City, and many of them never learned English nor any other language but their own. You don’t need much language to wield a hammer or install a window.  I would think the Babel crew would have been frustrated with the weird new situation but would have found comfort in continuing the construction, and meanwhile they would learn the languages of their friends.

But the story has a point: it is hard to unite people if they all have different agendas.

What I have done with this index card is confound simple English by subdividing words into phonetically similar, smaller words. The words (and one crucial phrase) I did this with, and their equivalents, top to bottom and left to right, are

Consider the market names of such drugs as Wellbutrin, Celebrex, Alleve, Claratin. Not hard to see that the drug-makers want you to think that use of the drug will help you get Well, let you Celebrate being alive, with your symptoms Alleviated and your breathing more Clear. (In the case of Wellbutrin, the name proved disastrously wrong.) Why do the drug-makers make up these names? Because it works; people buy into it.

“Words are not magic,” said an English professor of mine, long ago. “They are but crude approximations of Reality.”

But Reality for individuals is whatever they Think it is.

My friend Suzy wrote on Facebook that she wanted Midsummer poems for her newsletter. Here is what I gave her.

And here it what it says:

Marvel at the Solstice steam

It is wondrous in the scheme

Ice your plectrum for the flare

I was glad to to this for Suzy. She is a deeply spiritual and honorable person whose entire life has been a poetic journey, setting huge challenges for herself and meeting them. She both literally and figuratively walks the labyrinth. 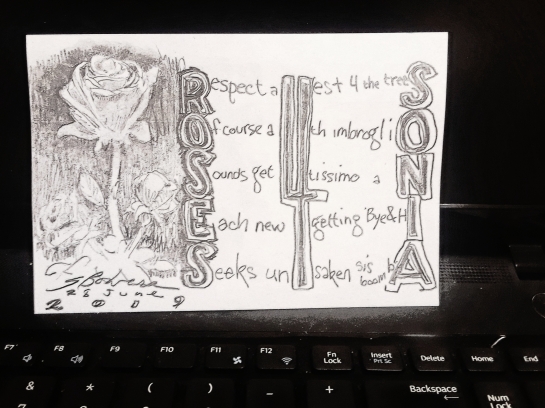 One Saturday last winter there was a slim woman in a long blue coat waiting for the 32nd Street bus that I take to work. I am normally too shy to initiate conversation with fellow passengers, but as I approached I found myself saying “Good morning.” And she shy-smiled and said “Good morning” as well. I had just met Sonia.

For the next dozen or so Saturdays, Sonia and I exchanged pleasant light conversation before the bus arrived. I learned that she was from eastern Europe and she lived with her daughter, who sometimes drove her to work. She learned that I had a daughter as well, and that I was a restaurant host and cashier at Matt’s Big Breakfast, which had a 32nd Street/Camelback location. Somewhere in there I suggested it might be pleasant if we had breakfast there sometime, if we could find a mutual day off where neither of us were too busy.

Then one Saturday she didn’t show. And the next, and the next. I figured her schedule had changed. Sighed a little. She was so nice.

But months later, yesterday, I was waiting for the bus and who should walk up but Sonia! Wow, was it good to see her. “What’s your favorite flower, Sonia?” “Ummm…roses.” “I’m gonna draw some roses for you.” And I did. And I gave her the drawing this morning, on the condition that she pose with it. Here they are! 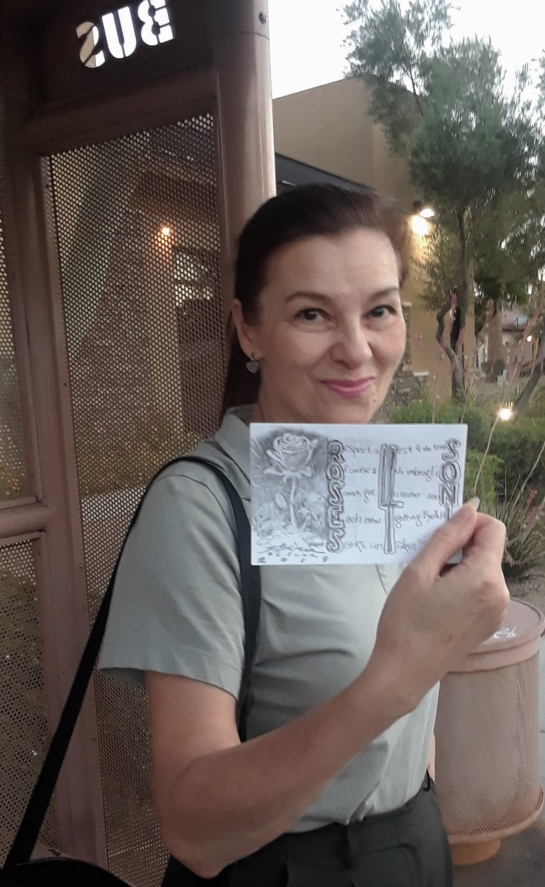 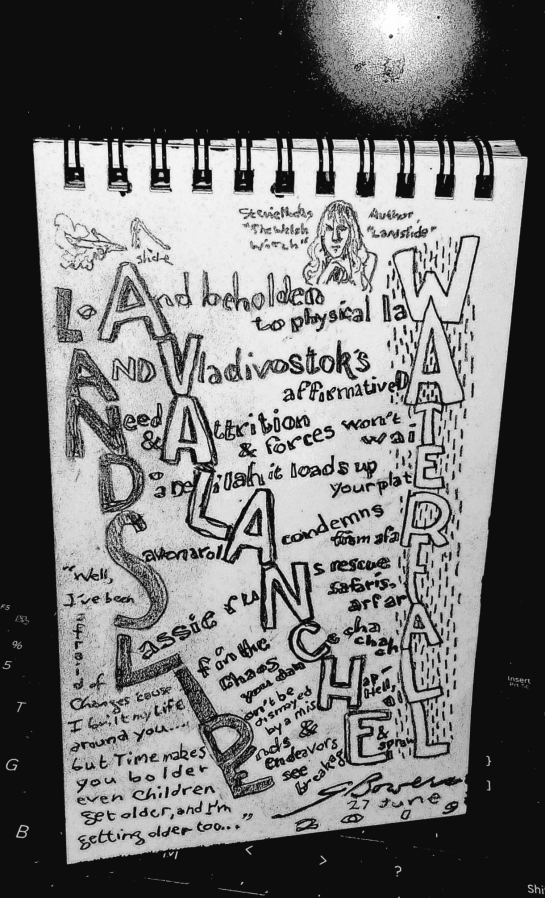 Oh, mirror in the sky, what is love?
Can the child within my heart rise above?
Can I sail through the changin’ ocean tides?
Can I handle the seasons of my life?
Stevie Nicks, “Landslide”

Landslides, Avalanches and Waterfalls all involve the force of Gravity on a massive amount–tons–of the elements. And so when we think of a metaphorical Landslide coming down on us, or a roaring Avalanche on our heels, or going over Niagara Falls in a barrel, some kind of catastrophe is occurring in our lives.

lo and beholden to physical law
and vladivostok’s affirmative da
need and attrition and forces won’t wait
do a delilah it loads up your plate
savonarola condemns from afar
lassie runs rescue safaris, arf arf
if in the chaos you dance cha cha cha
don’t be dismayed by a mishap–hell, all
ends and endeavors see breakage and sprawl

each a cosmos-splash on peak or shoe 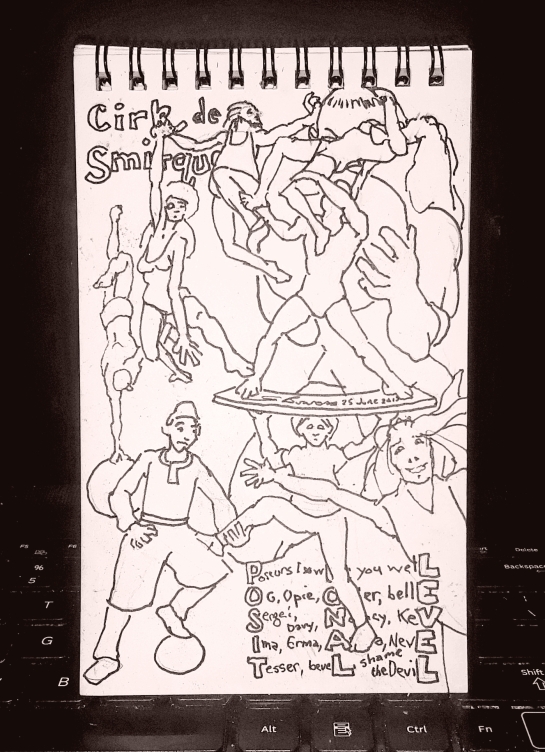 I have never seen a certain acrobatic troupe in live performance. I hope to some day, but a ticket is above the pay grade of a practitioner of Shoestring Economics.

Nevertheless I admire the performers and wish them well; and this weird, chaotic, drawn-by-the-seat-of-my-pants sketcharama is my tip of the hat to them.

Note: OG stands for Original Gangsta. Opie was a character played by award-winning director Ron Howard in The Andy Griffith Show. An ostler is someone employed to tend the horses of inn guests. “Tesser” is an action invented by Madeleine L’Engle in her Newbery-Award-winning novel A Wrinkle In Time; it means to travel through a fourth spacial direction, bypassing length, width and depth. “Shame the Devil” is part of that fine old adage “Do your work and shame the Devil.” These were all chosen to showcase diversity, realism-optional magic, and work ethic.

Take my signature/date and the dedication to superstar sf writer and conceptualist Larry Niven off this image, screenprint it a kajillion times on a bolt of Hawaiian-shirt silk in wild colors, and I think we could sell some shirts. No charge for the design but I want free shirts for life. 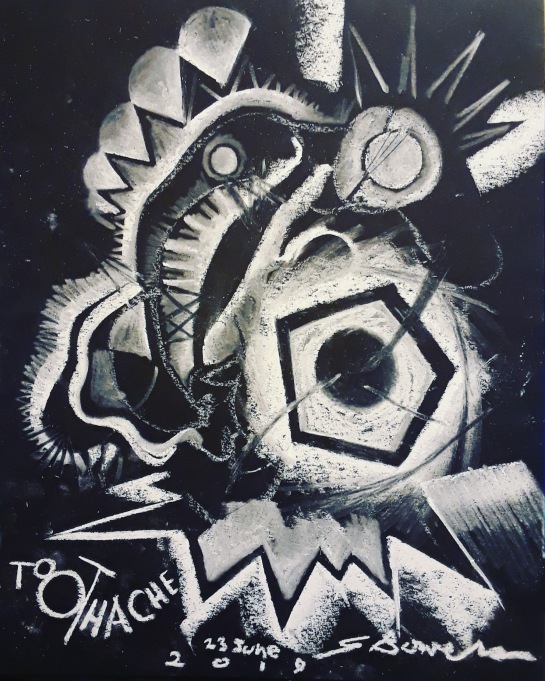 Two days ago my bad tooth got worse. Yesterday, it being Saturday, I went to Urgent Care instead of a dentist. The PA had me hypo’d with antibiotics and cut me an Rx for an oral course of them. Said if the swelling got worse, specifically if it spread to the eye, that I should check in to a hospital emergency room.

Today it got worse.

Off to the ER I went. I am here still. They got a urine sample, a few tubes of blood, and they IV’d me for more antibiotics, pain stuff, and iodine for the cat scan I just had.

Yesterday the PA told me a friend of hers had died because the cellulitis reached the orbit of her eye, affording quick access to a vulnerable brain. Well, Friends, not this kid. Better Safe Than Sorry, said co-workers: sweet server Dez and barlady Brie and magnificent managers Michelle and Shawna as they observed the puffiness of my face. Ladies, you may have saved my life. Thanks!!

In 2016 the most powerful office in the United States of America was hijacked by an opportunistic liar and a hostile foreign power. My country must undo the awful damage that followed. I am grateful that steadfast, decent patriots such as Robert S. Mueller are here for us.