Disks are not everywhere, but they are manywheres. Most coins are disk-shaped. Before solid-state storage came along, disks held all our computing data. Frisbees, 12-Step medallions, pupils, irises, the Sun and Moon from this distance…it’s Disk-O-Mania.

Long ago Robert Burns took his Scots dialect to this subjunctive couplet: 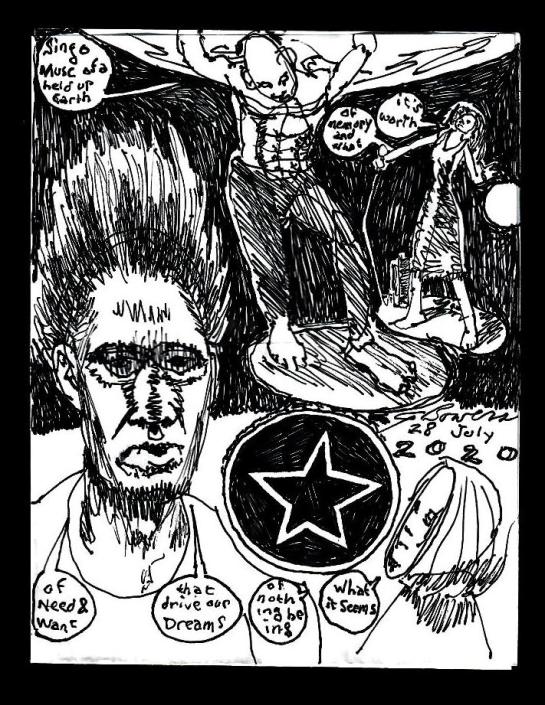 The dialog I have my sketched characters say in this images comprises two couplets, and they comprise a small poem. It goes like this, and though it’s untitled, it’s all about disks:

sing o muse of a held up earth
of memory and what it’s worth
of need and want that drive our dreams
of nothing being what it seems.

Anyone care to estimate the total number of disks in this image? Don’t forget the red corpuscles coursing through the circulatory systems of the characters, nor the follicles from which the wild-haired dude’s hair springs. 🙂 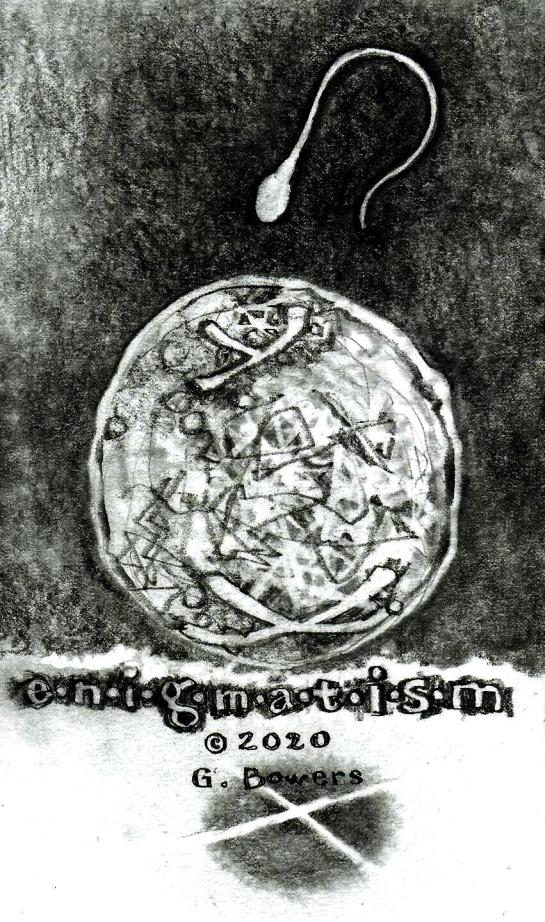 Enigmatism
They ate me alive yet I live. It’s perplexing
To walk and draw breath though in stomachs digesting
I guess it’s a metaphor pho, sis, and flexing
Reality’s shape just for grins and for cresting.
Before ’53 I was nutmeg and veiling
Then half of me swam to the other half waiting
And storming the cellular castle assailing
Exploding within for the DNA mating.
I don’t guess I’ll be here in tangible form
A half century hence, and that gives me the shivers,
But the Universe leaves me to stray from the norm
And I eagerly wait to see what She delivers.

At top is a drawing exercise–the task I assigned myself was to do foot studies without looking at any feet. As I was working on it the singing voice of Hiram “Hank” Williams Jr. cued up in my mental jukebox, doing his Monday Night Football theme song, which begins, “Are ya ready fa some FOOTBAAL?!” (I have spelled it the way I hear him sing it.)

Then my scattershot memory took me back to Vacation Bible School, where my parents stashed me and my brothers one afternoon long ago as they went off to have some fun with their high school friends, the Olafsons. The Bible reading mentioned Ba’al Peor, one of the “Thou shalt not have other gods before me” gods of the Old Testament.  So I did an Internet search on Ba’al Peor, and a fountainhead bust caught my eye. It looked a little like a nuclear bomb had just been detonated in his skull. I sketched from the photo some and then closed the site and let the drawing tell me what to do. Some of it was blind-sidingly unexpected.

Reflecting on an alliterative interjection…

On Facebook there is a poetry group called Poets All Call. I am one of the group’s moderators, and I contribute with my poetry and with a weekly feature called Title Tuesday, in which I provide five titles and invite the poets to use the titles as prompts.

It’s Friday, and there hasn’t been much activity in the group–perhaps a sign of these pandemical times. So, since I think both writing poetry and reading poetry is good for the soul, today I tried to lead by example by starting a poem without any inspiration whatsoever. As the poem unfolded I got some illustration notions, and I went back and forth beteeen the poem and my drawing.

Here is the poem that inspired the drawing.

grab those bootstraps
(to my fellow Poets All Call members)

hey, i just said something
this is first gear
and i remember thinking
about atlas this morning

what’s HE standing on when he does it?
why doesn’t he just rest the Earth
where he is standing?
and why isn’t there a theme park
where his beyond-gigantic hands are?

as for the poetic nonsense
of certain reverends
it neverends

you might enjoy some motherhood yourself
if not tomorrow (who knows?)
then right now–yes, now!
you have a notion
knocking about in your fanciful head–
i know it!
please share it!
start from scratch–
grab those bootstraps!!

There is a coin shortage in the United states of America. Less commerce is being conducted on the premises of brick-and-mortar establishments, and when there is commerce, debit/credit card use is encouraged, in order to reduce personal contact and maintain social distancing. This is yet another facet of the COVID-19 pandemic.

Unbidden, the acrostic “COIN FIX& FLIP” came to me. “Fix and flip” is a term usually applied to cheaply-bought houses or automobiles. The faster a house or car is repaired and sold, the more Flippy the Flip is. But when it comes to the coin shortage, you get extra mileage out of the Flip aspect, if you are as miserable a punster as I am. To complete the wretchedness, the spot illustrations are all coin-related bad puns.

change CHANGING from Cha-CHING as if
one pops anon before it snaps. i’ll
in FILTRATE explain the diff — i
need to CEDE & cut the CRAP

This mostly makes sense if you are a Southwestern American on the vulgar side. “Change” is short for “pocket change,” which is coins.”Cha-CHING” is onomatopoetic slang for making money. “Pop” has a moiney connotation. “95 cents a pop” means 95 cents each. A Filtrate is the stuff that’s being filtered, in this case coins being filtered out of circulation. To Cede is to give way to pragmatism. “Cut the Crap” is vulgar Americanese for “End this nonsense.”

A few balancing acts: Justice with Dance, Figure Drawing with Abstraction, the Serious with the Playful, and Freshness with Finish.