Full disclosure: Though I was furloughed in March, I still consider myself a Cashier/Host of…Matt’s Big Breakfast. 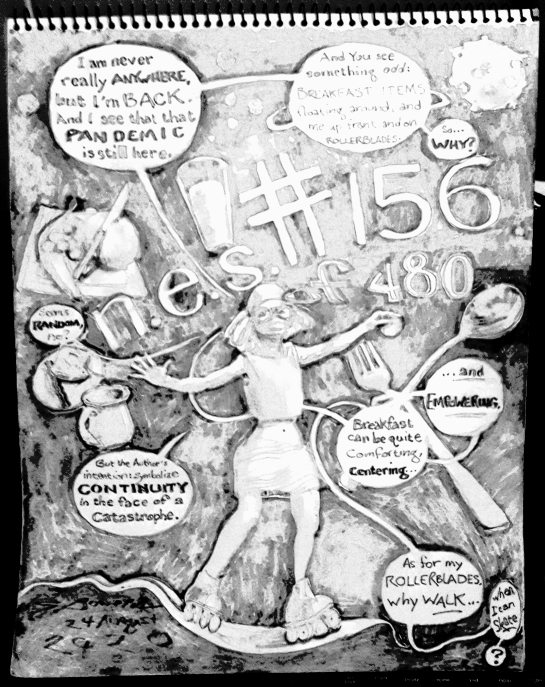 A performance is an event in time, made up of many sub-performances. A drawing or painting is a different kind of performance. All you see is what remains on the page, or the canvas, when the artist stopped.

But when I stopped working on this drawing, I intended the viewers to have a different experience, one that would be interactive whether the viewer chose to interact or not. To at least a small extent the viewer will “finish” the page in her or his mind. And, imperfect as my technique is, there is an opportunity for the viewer to create an image, and acrostic poetry, superior to what I have done.

Of course, all of the above paragraph might well be rationalizing nonsense by someone who is too lazy to finish the drawing and the poems…

But no. The pair of couplets at upper right establish that I meant to leave the image in glorious disarray.

Inglorious disarray, I tell you. 🙂

Phoenix, Arizona, USA, one of the hottest places in the country–117° F yesterday–and one of the hottest hotspots in the world for the spread of COVID-19–is a city full of people who flout the mask-wearing mandate in various ways. Shame on us!

Here is an illustration for a story that has not been told, much less sold. I invite you to write that story and then either tell it in a comment on this post, or sell it on the open market. (No compensation to me, other than acknowledgment that I inspired you, is necessary.) 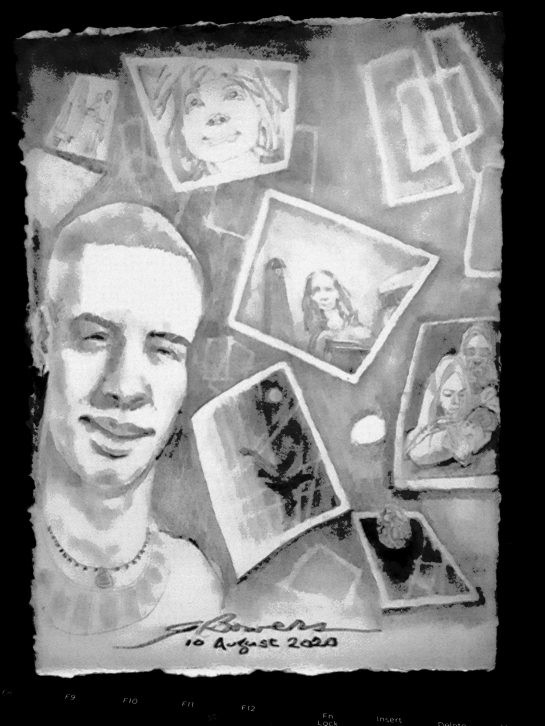 I had some goalless drawing fun today, so without further ado:

Goal might be Attainment or Aspiration or Ball Meets Net. Post: Mail Pickup/Delivery or After or Online Creation or Cylindrical Supportive Object or Emily the Mannered’s Last Name. And Goal Post is either End Zone Structure or Benchmark Blog Entry.

I had intended to do a special Goal Post called “Blog Post #1700: Score!” Alas, I lost track, and this is actually Blog Post #1704. “Our beginnings never know our ends,” said Thomas Stearns Eliot. How right he was, and remains.

grant that a metabolism runs on atp
obligating intake lets an anabolic be. o
as we take our nourishment in mres or feasts
let’s feed our spirit with an imam rabbi monk or priest

EVERYONE has a Spiritual Side, Friends. Everyone believes SOMETHING, if only “I believe I’ll have another beer.” Your beliefs are your motorized transport. Safe passage to you!

perhaps a needed epiphany lurks in some trickery

The United States is in many ways the worst country on Earth in terms of the coronavirus. And Arizona is one of the worst states, and Phoenix one of the worst cities. Here I am, a house-arrest Exile. But I have chosen to share my image with a remastered Botticelli’s Venus. Her clamshell will protect her.

In a sense, this drawing has taken more than six years to do. In late Spring of 2014 I was working the graveyard shift at Sedona Winds Independent Living Retirement Community. A small part of my job was recycling the day’s menus, about 150 of them, into scrap paper. We had far more scrap paper than we needed so I would use some for myself. One use was the making of 15×15 grids so that I could do the newspaper’s crossword puzzles without marking up anyone’s paper. I also drew grids for my own crossword puzzle construction, and for my artwork. The grids on this page were done in that longago faraway time. The checkerboarding and the drawing and the word balloons and the though balloons have all been done within the last 24 hours.

The bird is saying “Well, this is AWKward.” Scrutiny will reveal that the bird has left a calling card on the steps.

The man is thinking, “Very Funny, Guy Who Drew Me, putting me in underwear and naming me Art.”

My signature is saying, “It gets worse, Dude. Your last name is ‘Saek.'” His full name may well be Art 4Art Saek. In Latin Art for Art’s Sake is “Ars Gratia Artis.” For many years the Latin phrase graced the MGM roaring-lion logo. The implication was that Louis B. Mayer and Sam Goldwyn didn’t care about money, just Art. Hooray for Hollywood, Friends!

The Pawn leans toward all three but does not say or think anything. People who use Pawns sometimes get uncomfortable if the Pawns don’t keep their thoughts and words to themselves. To me, my Pawn seems to be in “Watch And Learn” mode.