For those not in the know, “threefer” is American slang for “three for one.” It is also Gary slang for “triptych.” 🙂

The leftmost card features four similar-sounding words, with an attempt to visually make metaphors of the words. So “deifying” has a celestial tang; “defying” emphasizes the “fy” in the middle, which could well stand for “fuck you;” “DEAFENING” has a huge first syllable, which diminishes the “sound” of the last two syllables; and “defining” has the look of an entry in a dictionary, wherein one may find definitions. Not only does doing this feed my Poetry Beast, it is also a tip of the hat to one of my grade-school art teachers, Mrs. Johnson, who once had us think of a word we could demonstrate, e.g. make the letters of the word TALL tall, grow some hair on the word FUZZY, and so forth.

The middle card has a mesmerized mathematician at upper right, a pole dancer up the pole at center stage, and a festoonment of math symbology and equation fragments throughout. “What the Mathematician Saw at the Strip Club.” This is loosely inspired by Nobel-Prizewinning physicist Richard Feynman’s recollections of his strip-joint experiences, as published in Surely You’re Joking, Mr. Feynman! Adventures of a Curious Character. But my drawn mathematician does not bear any resemblance to Dr. Feynman, because his character is quite different, being enamored of the dancer and imagining what the possibilities of Booty were as She [dancer] approaches Me [mathematician]. A bit of combinatorial meandering, mixing playfulness and pathos.

The rightmost card is a drawing of an earthmover that illustrates my double-acrostic poem “Earth Mover.” I do so love the look and dynamics of these mechanized beasts, and do so hate the effect they have on animal habitats. My special Jiminy Cricket in these matters is American/British actress Beth Porter, whom many of you may have seen in the Hitchhiker’s Guide to the Galaxy series. Beth once gave me a stern lecture of the effect of the palm-oil industry on the habitat of orangutans. And she was absolutely right to do so. “Earth Mover” is dedicated to Beth, with gratitude for making me more mindful.

Engaging Soil to build a dream
Entrepreneurs may break a seam

Anticipating GO/NO-GO
Are machinations to & fro

The ground resists is indiscrete
Then Horsepower makes a dig complete

He was a fine Beatle, a transcendent songwriter, and a true and caring citizen of Eath.

I drew a face trying to think of no one in particular. To me he looked like the illegitimate son of Salvador Dali and Adam Driver. And he seemed to be looking intently at something right in front of his face. So a waspish creature came to be, singing a lyriuc corrupted from “Summertime.” So my surreal actor corrupterd the word “Awesome.” 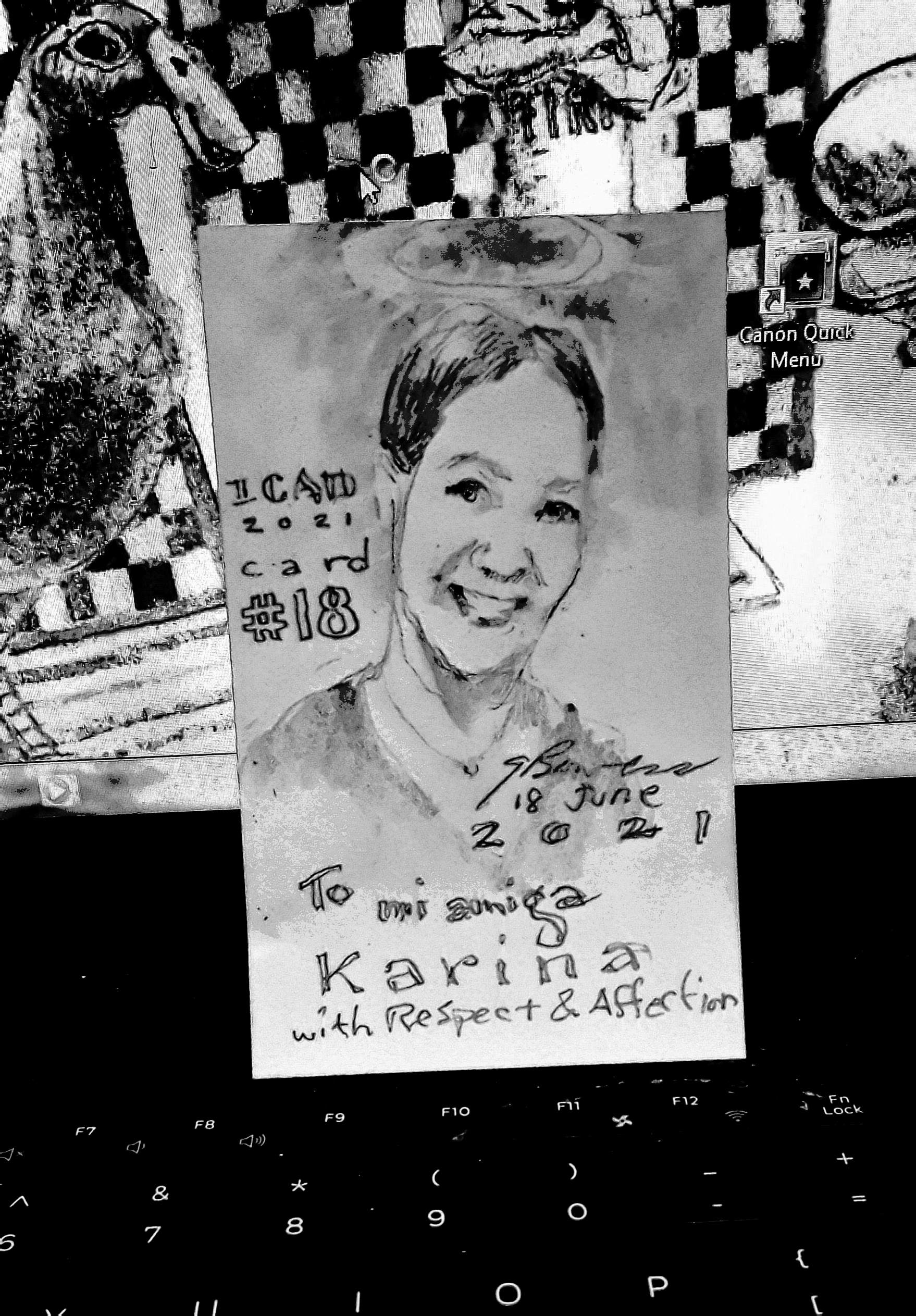 Here is a portrait of my co-worker and friend Karina. It is hard to capture her beauty, fierceness and sweet nature all at the same time. “It looks like my aunt,” she said of an earlier attempt. This is the best of five tries

I had lightning on my card, but nothing else. drew a house to give it context. More townstuff wanted to get in there. And then like a bolt from the blue came the realization that Mother Nature was playing a part.

Personifying Her was a challenge. She needed to be no particular race, and yet all races. I gave Her angel-like garb and a slight suggestion of dreadlocks. Her breasts swelled with the milk of human kindness, yet she wore a stern expression with a touch of sorrow, knowing Her lightning was necessary for life, yet caused death.

Lightning IS necessary for life. I went into detail on the Nitrogen Cycle that lightning makes possible, on a blog post long, long ago–early 2013 if my memory serves. But a lightning bolt can destroy a tree, start a fire, electromagnetic-pulse a man. My friend Doug was unalterably changed after lightning struck him, but thank Goodness his champion’s spirit and gentle good humor survived the strike.

When Mother Nature comes to call
Ball Lightning in Her hand
The En-Two’s fixed and then is all
So f e r t i l e in the land.

A drawing that came out of nowhere.

Friends, my eyesight is worsening. After doing these Iresolved to get my eyes checked and get a new prescription. If surgery is indicated I will probably get it. –So I’m afraid “Feast your eyes” is not the right thing to say right now. Perhaps it would be better to take a tip from the bald man’s face and “read between the lines.” 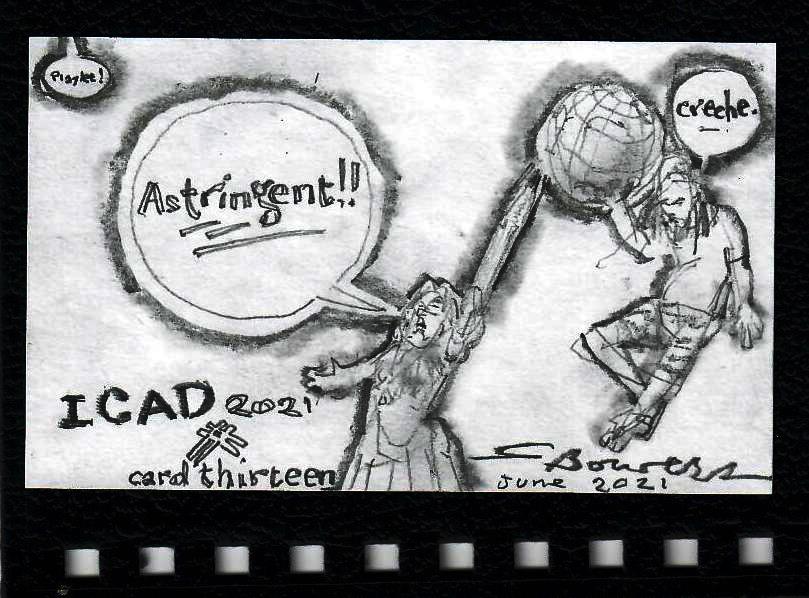 There may be a lot to be said about this one, but it won’t be by me. An explanation would be inaccurate. It might be a good springboard for speculation, though.

Cataclysm, catatonia, catarrh and catastrophe all start with Cat. Doesn’t mean we can’t love them.