Here’s a sketching exercise done after freezing the frame of a DVD I was watching. The wonderful fact is, an expert director and director of photography and cinematographer and costume designer and makeup department have all conspired to give the viewer, and the sketcher, an excellent composition and value array, for delectation. From that, the sketcher can report what she or he is seeiing, or play with it, or hybridize. This sketcher decided to focus on faces and gesture and leave out a few details.

The conceptualization for this page occurred while I was walking home from a drug store/pharmacy called Walgreens, sipping and then gulping on the first-world drink I had purchased, a Naked Blue Machine. It tasted sweet. Research revealed that similar products ARE sweet, to the tune of about 13 teaspoons of sugar per unit; and the nutritionally-valuable fiber is been mostly removed in the juice-making process.

So this is a product that suckers people into drinking something that they think is good for them, and it’s priced for the upscale consumer. Anyone with fresh fruit and a blender can do much better for themselves with their own concoctions, which with experimental effort will ultimately result in a drink better, tastier, and FAR cheaper than this store-bought, blatantly First World product. (I refer now not to the product I had purchased, but to the satirical product depicted above.)

I tried to be funny when I did this,m but world events have deadened my funny bone. Please think of this page as a Caveat Emptor public service.

Technical note: The “iii” in “driiink” is pronounced “three.” So the phrase becomes “snort or three.” The acrostic construction process makes for strange bedfellows, in this case triplets.

find your bliss with wet, not weed
in the kick your totters teeter
riffing with your snort or iii
savoringly in between
tasty and the kitchen sink

This was fun to draw, and I felt blissful while it unfolded. it is a candidate for a larger-scale drawing or painting. 7″x10″ is good for working out main compositional details but 20″x30″ and up would provide more detail breathing room, and more opportunity to knock people’s socks off. 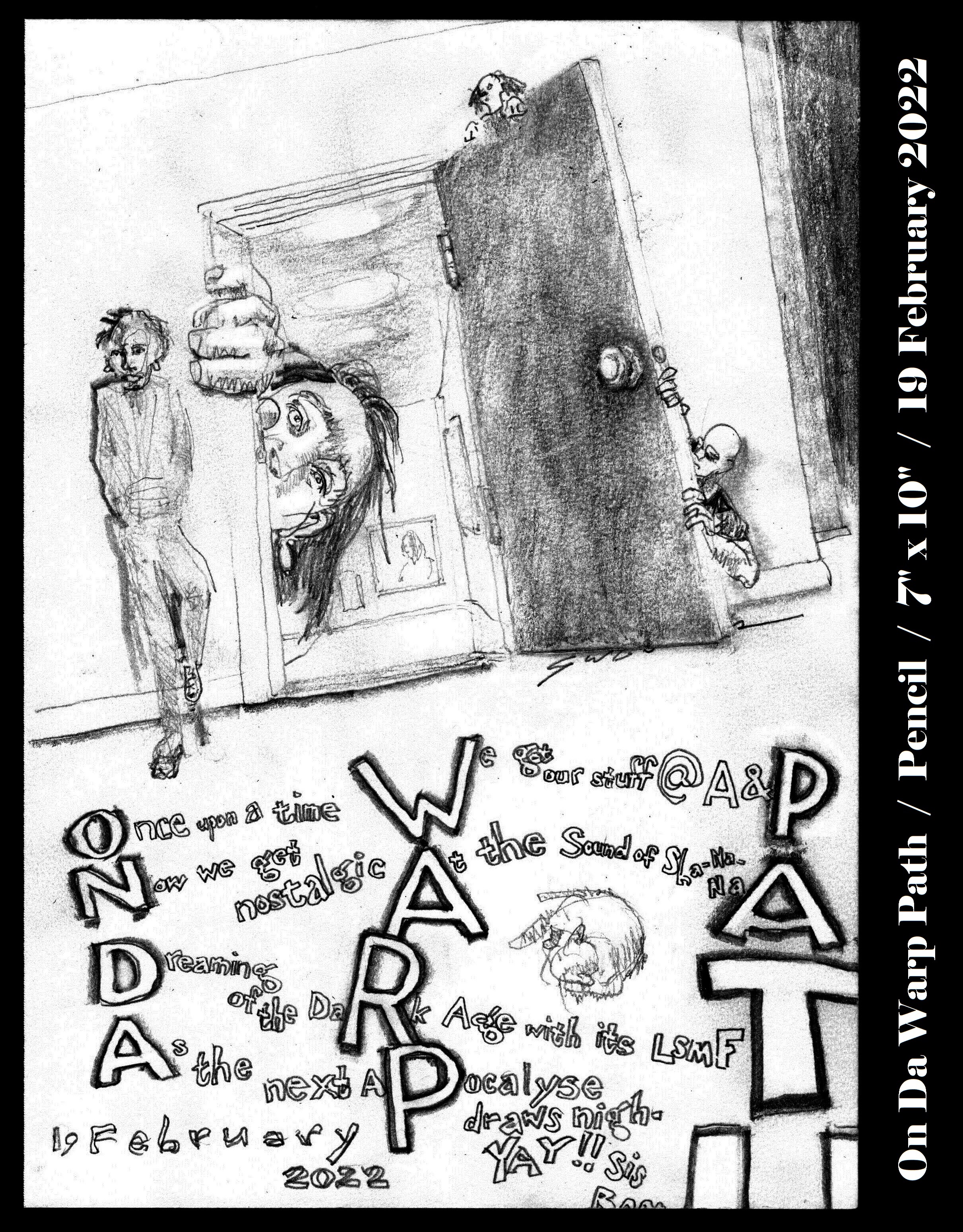 Once upon a time we got our stuff @ A & P
Now we get nostalgic at the sound of Sha-Na-Naa
Dreaming of the Dark Age with its LSMFT
As the next Apocalypse draws nigh–YAY!! Sis Boom Bah

“Sha-Na-Naa” refers to a band with a similar name, Sha Na Na, formed in 1969 and still active. {romulgators of the musical genre Doo-Wop, their perhaps most famous hit song is “Good Night, Sweetheart (Well, It’s Time To Go).”

“Sis Boom Bah” is part of a cheerleading chant originating in 1867. The Sis and Boom are intended to be imitative of an ignited firework going up into the air and then exploding.

Here is how I spent my midmorning. I had had a cup of coffee and fiddled around on the Internet some. Then for about the millionth time I realize that much of my life was going down the Shallow Fun drain. So I codified my concern with this poem, which I posted to my Facebook group Poets All Call:
****
Toxic Enjoyment

It is not cancer but
It is eating my time alive
It is fatal frippery
Terminal twiddlethumbing
Toxic Enjoyment
When I wake up I find
That the Fun God Fungus
Has given me more coins
More tickets
More lives
And so I sit on the edge of my bed
For maybe forty-five minutes
And wrestle with opponents
Or make things blow up
Or figure out a word
Finally I come to my senses
And look myself in the bathroom-vanity eye
And say (I swear) “Be Careful.”
I have Be Carefulled myself
Almost every day for years
And till now it has meant
“Be Careful whilst flossing and brushing;
Your teeth are not spring chickens”
But now
Today
It means
Be Careful
Not to leak
The rest
Of your life away
On pointless
Non
Con
Struc
Tive
Empty
Enjoyment.
Most of me nods
And thinks Whew,
Thank Goodness
The Right Track is back!
But the little I-Wanna Weasel
Chuckles and says
Smugly,
“I’ve heard that one
Before
And I will hear it
Again.”
****

Naturally, after I posted the poem the question arose: What IS the best use of my time right now? A two-hour drawing followed. It is flawed, and, despite the two hours, rushed. I hope the viewer will derive some (non-shallow, heh heh) enjoyment from the cryptic storytelling involved, and perhaps from the crude force of the draughtsmanship.

This one is atypical of my drawings in that the drawing details are in caption form at the bottom, and part of the image. I may do this more, and the images thus captioned may become postcards, or refrigerator magnets, or elements for a gallery-like montage. Time will tell.

Irving Berlin, Cole Porter and the Gershwin brothers fully appreciated Ethel Merman’s phenomenal voice, precise diction, and fluid, eloquent gestures to sell their songs with gusto and ferocity. Bette Midler is The Divine Miss M, but she is not the first. Midler is more than fair-to-middling, though, and for my money the heiress of the Merman mantle. And they both have referred to themselves as Broads, and they both have a lusty, ribald side.

I learned through my brief obsession with Merman during the last couple of weeks that though she hit the heights professionally, in her personal life she was hit hard with tragedy and heartbreak. When she sang “There’s No Business Like Show Business” she had been everywhere the song goes, with the possible exception of being escorted out of town by the sheriff. But she often had it tougher.

For some reason, I was thrilled to learn of her hearty sexual appetite. Perhaps in some improbable corner of the Multiverse, Chance brought her together with a young man less than half her age . . .

Pescan: adjective. “Of or relating to Fish.” Not for the unpesky. 🙂

Fun fact: The Salty Señorita is a popular bar in Old Town, Scottsdale, Arizona, about five miles from my apartment’s doorstep.

Today I’m a little bit lonely for cats, so I made two of them with my new Gouache set. This partakes a little of a two-colr spot-illustration style popular when I was a toddler.

A couple of days ago I went to Arizona Art Supply and got a gouache set, a pointed sable traveler’s brush, and a block of hot-press watercolor paper. My new policy with art supplies is if I buy them, I must start using them the day I buy them.

This is my first effort with my new supplies. Started with red and a simple checkerboard exercise. Then did some blue, with a Leave A Blank Rectangle In Each Square rule, amended to allow for two at lower right. (I was learning as I painted that the ceiling fan’s circulating action caused the painting my ad-hoc palette to skin up. There’s some clumsiness and unintended dry-brush toward the top.)

When I looked at what I’d done, it seemed like a reductive, mutant version of the flag of my country, the United States of America. Instantly it seemed like an apt metaphor for the reductive, mutant version of “Patriotism” peddled by former President Donald Trump to seduce his misled minions. (I have said more than once that Trump is not a leader; he is a MISleader.) So my first Gouache foray became political, with red and blue mixed and watered to create text, signature and date.

Last I heard there were five different kinds of Life–Plants, Animals, “Protists,” and two kinds of algae. Maybe. Probably not. My brain is in cognitive decline, and I don’t have time to look it up, and the point anyway is that within the strictly-biological definition of “life” some enormous variation is possible.

But there’s non-biological life too. Human beings have developed a self-replicating form of mechanism. Maybe. Probably not, but something like that. My dim memory says it’s chimerical, and much like the “biots” Arthur C. Clarke presciently described in his rollicking, imaginative novel Rendezvous with Rama.

We also speak of artwork as if it were to some degree alive. We use words like “vitality” and “animated” to codify our viewing expderience. If the work of art is representative of wildlife, we may judge is in comparison with what it is meant to represent.

So we come to this, one of my recent creations. It began when I finished my oatmeal and took a second spoon and put it in the empty bowl with the first. I liked the way the spoons and bowl looked, so I took a pic and made a drawing based on the pic. It seemed to want a bone, so I drew a bone, and shadows. I decided to construct a double acrostic, “bowl/nest.” When I came to the second line the word “owlish” suited the meter, and it was an easy link to the endword “scene.” (Acrosticist’s Tip: ALWAYS start with the endwords, if you want your poem to rhyme AND scan AND make sense!!)

And then I looked at my drawing again, and I saw that I could make bowl, spoons and bone a literal manifestation of an “owlish outlook.” BOOM, I was in Surrealsville, where dwell Auguste Redon and Sal Dali and Tanguy and other guys and gals. And I’ve had years of sculpting birds of chimerical DNA. So, to use a wretched pun involving a letter of the Greek alphabet, a Chi-Miracle occurred, and suddenly the bowl/nest was nested in the eye socket of an improbable owl. I made the other eye a teakettle to preserve kitchenality.

Weird? YES, WEIRD.  I’ve laid the foundation for Weirdness in my first paragraph: LIFE IS WEIRD. And Art sometimes demands creation beyond the initial notion of the artist.  Here we see what happens when we let Art call the shots.