Today there are two works in progress and one finished. First, a vase thrown in January of 2007 gets a substratic coat of acrylic paint mixed with matte medium:

Second, a page begun last night got another slug of composition work put into it: 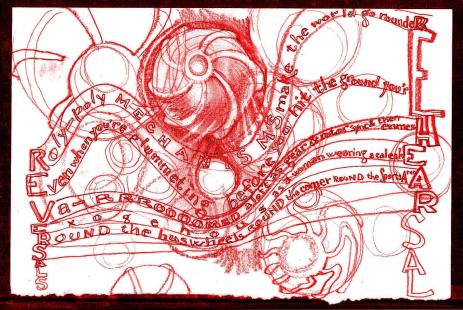 Lastly, here is a poem in the form of a note originally posted to Facebook, written in its entirety today.

cold and fuzzy in the neverafter

but i and most of the usses can’t even state the laws of thermodynamics
but in our wonderful 21st century we can look it up
so here’s a quick education courtesy of wikipedia
between the asterisky borders:

This morning Denise told me something that inspired first the acrostic bookends and then the words within them. This page and this post, therefore, are dedicated to her, with my love. 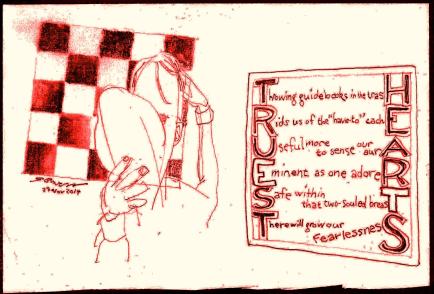 There are some words that seduce the poet through ululation. Ululation is one such. Then there are uvula, Pavuvu, Honolulu–and alula.

An alula, also known as a spurious or bastard wing, is a substructure of the bird’s wing that when flexed changes the airfoil of the wings, raising the pressure differential of upside and underside airflow, which helps prevent the bird from stalling. My first encounter with this word was as a teenager reading Robert A. Heinlein’s “The Menace from Earth.” His protagonist, one Holly Jones, resident of the Moon, liked to fly using her top-of-the-line Storer-Gulls. Controls encircling her thumbs allowed her to flex her alulae.

When the happy mashup of Honolulu and a peregrine falcon showed up on my radar, I could not but celebrate with this page, which is really a celebration of the word alula and its plural alulae.

flight is pull & swoop & hula
atmosphere the crafter’s tool
lift her over honolulu
climb with her into the cool
oft aloft: the sky’s bathsheba
never stall–“thumbs” up, meine liebe

One of my most prized possessions is an e-mail I received from Roger Ebert on April 3rd, 2010. He was telling me that I’d inspired a Twitter tweet of his, and he screen-printed the tweet for my perusal. I still have the e-mail in my Outlook Inbox, and so was able to take a screen print, thus: 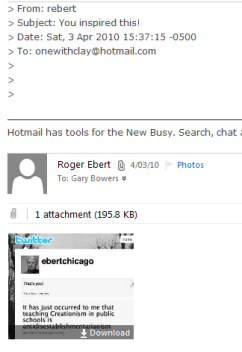 Here’s the journal page Roger saw that inspired his tweet that compelled him to send the e-mail: 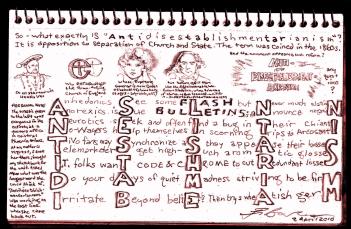 Lastly, here’s a Roger Ebert page I just finished today. It wasn’t the first Ebert page, and it won’t be the last. And let me make something clear: Roger’s generosity with his fans was thousandfold. What is a huge thing to me was something he did dozens of times a day. He read EVERY SINGLE THING his myriad fans sent him, and responded to an incredible number of them. I’m grateful for this tangible evidence that we interacted–it’s no coincidence that I’m doing this post Thanksgiving Day–but I’m sure that the number of people Roger similarly interacted with is well into four figures, if not five. And the number of people who miss him is in the millions. 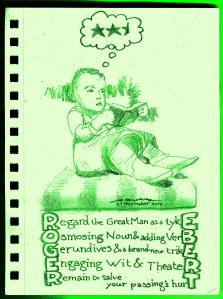 In some attempted creative expression the end product offers the creating party a trade, saying, “You don’t get to get me completely–I’m ungettable by my very nature–but I’ve got something you’ve never done before, and you better keep it.” I think this is one of those. 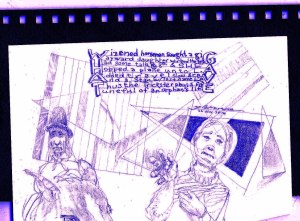 “We have clearance, Clarence.”
“Roger, Roger.”
“What’s our vector, Victor?”

–from AIRPLANE! and here’s that plus more in 26 memorable seconds: https://www.youtube.com/watch?v=fVq4_HhBK8Y 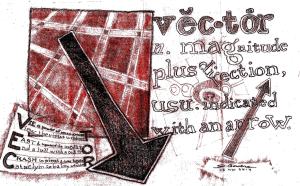 vie o power of cross-connect
view the vistas to redirect

crash to pieces & come together
cataclysm to balmy weather

My first Life Drawing class was in the Spring of 1973. My eighth or so was sometime in the early 2000s. Outside the classroom there were a few occasions, and today I found an unfinished drawing circa 2010. I believe the model was Valley-local legend Crystal Cruz. Shoplight lighting and a skeleton made for a good erotic/macabre ensemble. 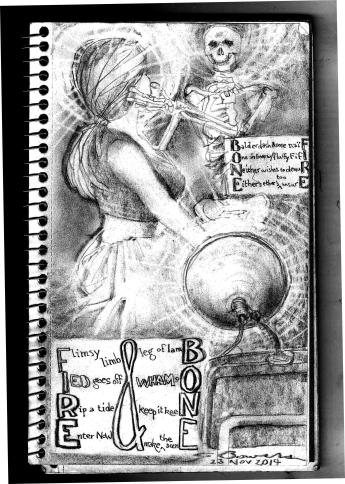 we wrestle with angels, demons, trivial decisions,
and the loomers who want us gone.

one loomer is patient,
often near invisible,
sometimes as darkening as an eclipse.

just as you need to drink before you’re thirsty,
you must struggle before the loomer looms,
or you’ll relax
and be taken.

This celebration of Charcoal in its various forms was done not in charcoal but in pencil. Without proper charcoal paper, charcoal, a real chamois, at least two kinds of eraser, and fixative, it is unwise to attempt a coherent charcoal drawing.

I here galorify Charcoal with three acrostic poems and one drawing of four Charcoal incarnations: 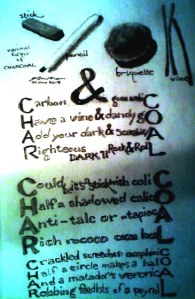 Crackled screeches: cacophonic
Half a circle makes a halo
And a matador’s veronica
Robbing feedlots of a payroll